Planning a trip is very easy but you also need to prepare yourself to scrape the nooks and crannies of the new country or city you are visiting. This was my thought when I embarked on a road trip to three West African countries.  Although I visited places that I have read or heard about. I also discovered new ones. Here are the five unique places I visited during my three days road trip. 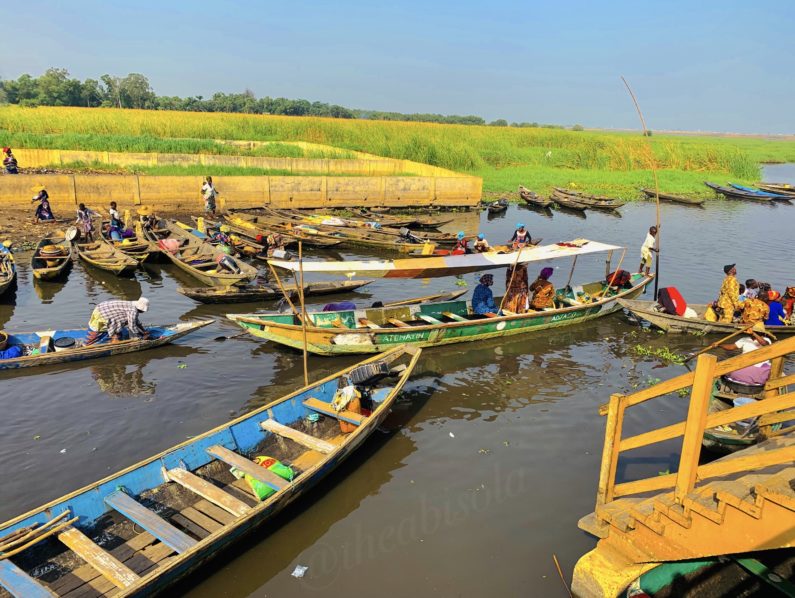 After spending more hours than expected on the road because of several roadblocks by bribe seeking custom officials at the Badagry-Benin Border. I finally arrived at Ganvie, a village close to Cotonou in Benin. Ganvie village is a small village built on Lake Nokoue in Benin. The village is also known as the Vernice of Africa with similarity with Nigeria’s Makoko. Ganvié villagers are called Tofinu (water people ) and they speak  Tofie language.

The village has colourful buildings with a population of about 20, 000 people. The Tofinus are mostly fishermen/women who sell their goods in a market close to the village.

The village is a functional one with different activities. The only means of transportation is boats. I saw some of the villagers on boat selling/hawking their wares, food and other items from one house to the other. There are different streets with names but the one we were able to pass through was called “Love street.”  On love street, we saw young girls dancing to traditional music while some were seated with their friends or lovers.

There are some parts of the village that are sand-filled where children are taught how to walk. I spotted some toddlers playing football on the sand filled ground. Also, their schools,  cemetery and the maternity hospital are built on the sand-filled ground. Despite Ganvie is a tourist attraction, some of the villagers are a bit hostile both young and old, especially when they see you trying to take pictures. 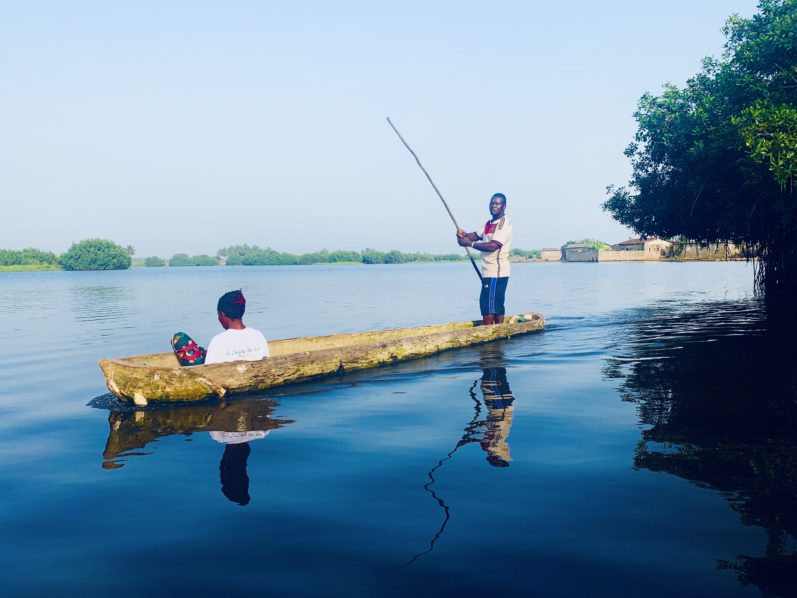 The salt lake is located in Ouidah, Benin. The lake floats under the bridge that leads to the Door of no return monument. Local salt is made from this lake by the people called Djegbadji. Like the Tofinus in Ganvie village are known for fishing the Djegbadji people are known for salt making. Although the salt is not made within the community instead they build huts at the other side of the lake with mangrove trees. Most families in this community own at least a hut for salt production. A woman we met in one of the huts showed us the process to which the local salt is made. The salt is boiled in big steel pots heated on a furnace. They are not mixed with any substances as the salt are extracted from the lake water and cooked for a long time. Once the salt has been extracted the women take them to the markets to sell.

Python Temple and the 21 Virgins 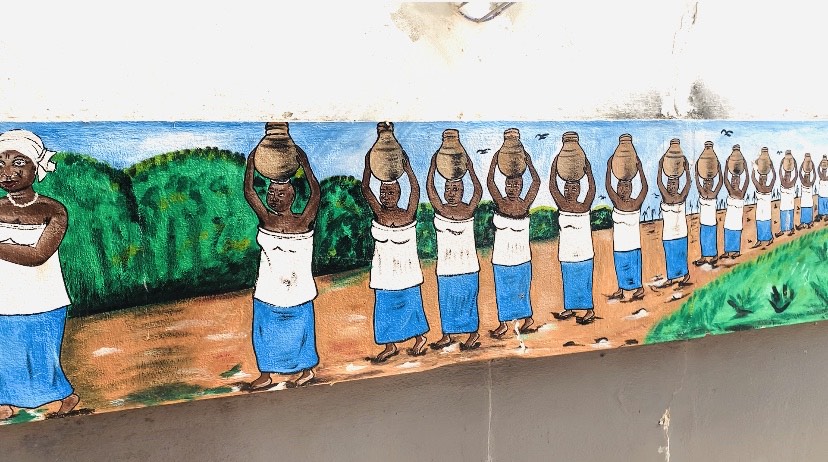 Then to the famous Python Temple in  Ouidah. The temple came to exist during the war in the olden days. When the enemies ransacked the ancestral town, a woman was said to have been protected by pythons and wasn’t seen by the enemies. The temple is opposite Basilique de l’Immaculée Conception (Basilica of the Immaculate Conception) the first church in Ouidah. Also, at the entrance of the python temple, you would see a painting of young women tying white clothes. The tour guide Abdul told us that in the olden days every seven years, 21 virgins would go to the stream to fetch water and pour it in a reservoir in the temple.

“But it is so hard to get  21 virgins these days, so 21 menopause women carry out the ritual now,” Abdul said. 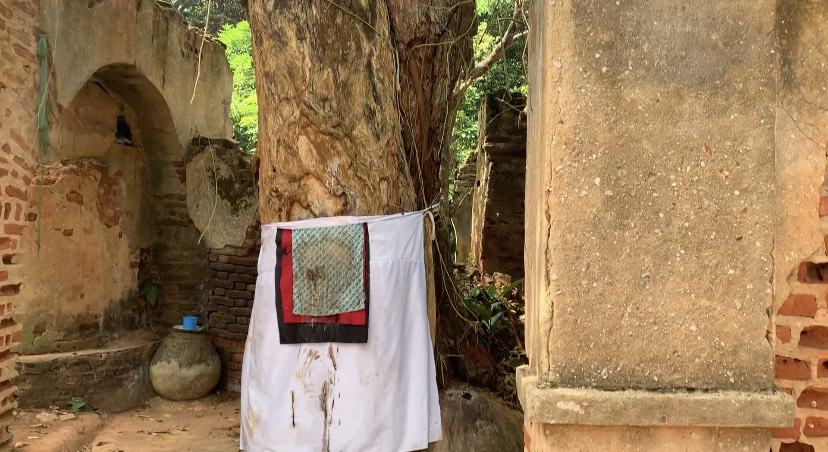 Kpasse is named after the first king of Ouidah. King Kpasse was believed to have transformed into a tree in order to prevent his enemies from killing him during the war. The indigenes of this community believed that King Kpesse transformed himself to a small tree in the forest which has grown to a tall Iroko tree. Prior to his death, the king instructed the people to look out for a sign that would indicate his resting place. He asked them to always pray to him for help, hence the annual spiritual ceremony held in the forest in his memory till date. There are other Voodoo Symbols/statues erected in the forest, like the god of iron, fertility god, the god of thunder and others. 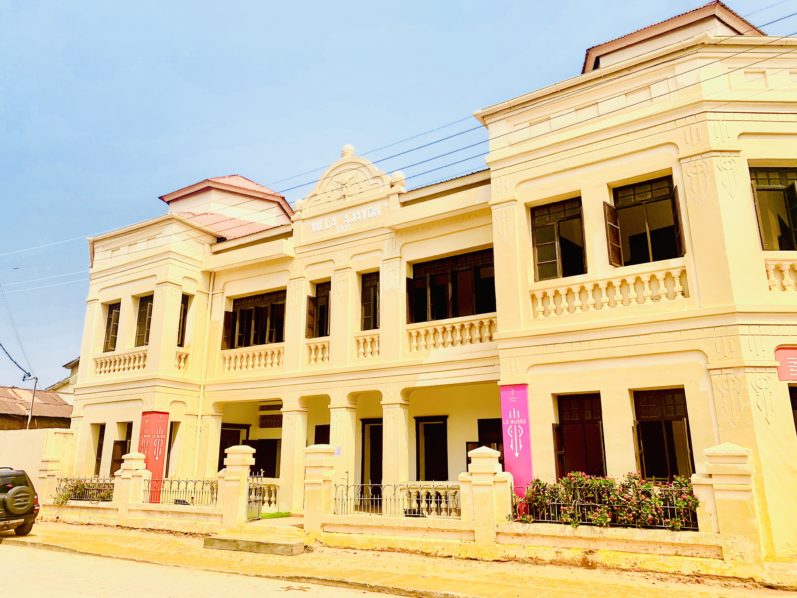 Then a visit to the Villa Ajavon. Villa Ajavon is a cream-coloured Museum built-in 1922. The Villa is just a few 100 metres from the Temple of Pythons. From the top of the Villa, you can see the first Ouidah church. In this villa, you will see many works of prominent African artists like Mickael Bethe-Selassie, Frederic Bruly-Bouabre of Ivory Coast and Cheri Samba of the Democratic Republic of Congo on display. My favourite artwork is the paintings of African hunters by Belgian photographer Jean-Dominique.