Curiosity is the secret of happiness and it is the pursuit of this happiness that makes us want to explore beyond the boundaries of our comfort zone.

Travel destination choices for many people do not go beyond the popular and familiar. The earth is incredibly vast and contains numerous lesser known travel destination. These unusual places are not for the faint or weak hearted. Some would thrill you, others would make you cringe in awe, and even in fear.

Below are some of the most unusual or lesser known travel destinations around the world.

Lake Natron is a salt or soda lake located in the eastern country of Tanzania.

The lake gets its name from its high levels of natron, a compound composed mostly of sodium carbonate and sodium bicarbonate, which are deposited within the lake via rainfall runoff from the Great Rift Valley volcano, Ol Doinyo Lengai. With its high salt content, extreme alkalinity levels reaching as high as pH levels of 12, and scorching temperatures reaching up to 60 °C (140 °F), most life forms find its waters to be caustic and inhospitable.

Dubbed the Medusa Lake of Africa on the shores of this enigmatic African lake, there are bizarre corpses of various creatures that seem to have the appearance of being made of stone. And because of the high alkaline collection, the lake looks red in color. In spite of all these conditions, it is grazing ground for the 75% of the world’s Lesser Flamingos. 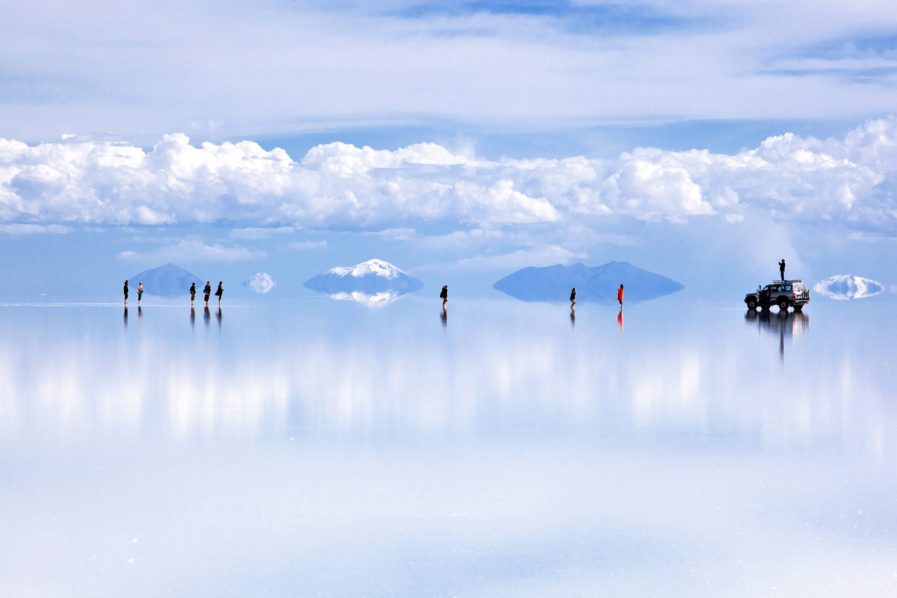 Salar de Uyuni is the world’s largest salt flat, at 10,582 square kilometers (4,086 sq mi). It is in the Daniel Campos Province in Potosí in southwest Bolivia, near the crest of the Andes and is at an elevation of 3,656 meters (11,995 ft) above sea level. And when a thin film of water gathers on the surface it is also the world’s largest natural mirror.

The Salar was formed as a result of transformations between several prehistoric lakes. 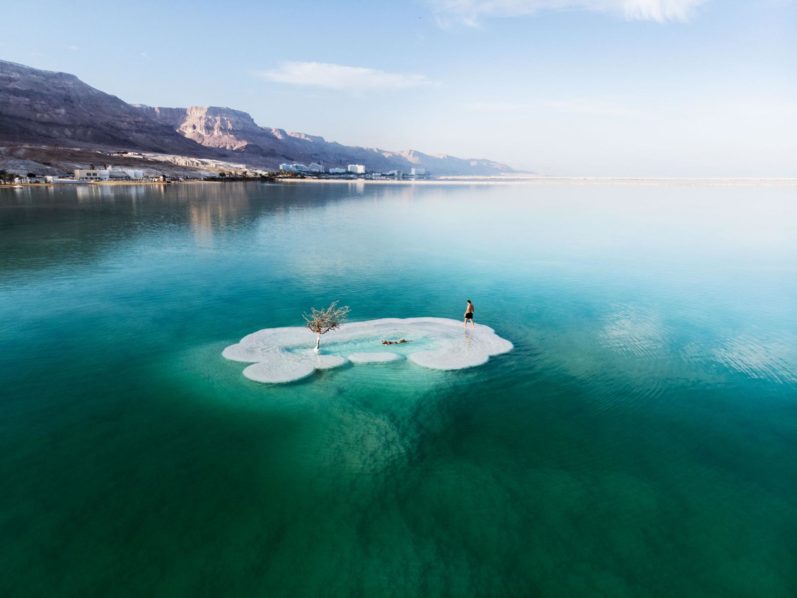 Also called Salt Sea, the Dead Sea is a landlocked salt lake between Israel and Jordan in southwestern Asia. Its eastern shore belongs to Jordan, and the southern half of its western shore belongs to Israel. The northern half of the western shore lies within the Palestinian West Bank and has been under Israeli occupation since the 1967 Arab-Israeli war. The Jordan River, from which the Dead Sea receives nearly all its water, flows from the north into the lake.

The Dead Sea has the lowest elevation and is the lowest body of water on the surface of Earth. With a salinity of 342 g/kg, or 34.2% (in 2011), it is one of the world’s saltiest bodies of water – 9.6 times as salty as the ocean – and has a density of 1.24 kg/litre, which makes swimming similar to floating. This salinity makes for a harsh environment in which plants and animals cannot flourish, hence its name. 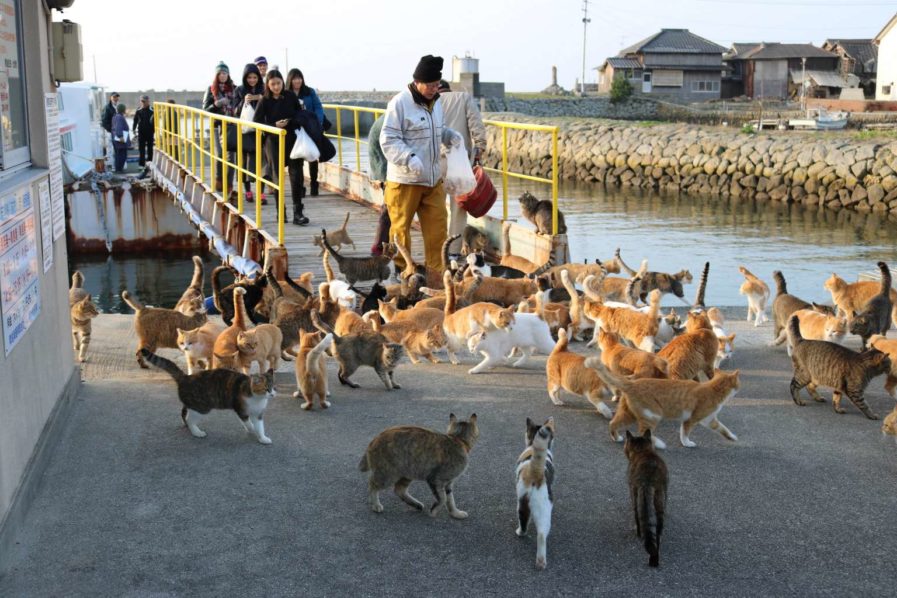 Aoshima, also known as Cat Island, is an island in Ehime Prefecture, Japan, known for its large number of feline residents. The island is roughly 1 mile (1.6 km) long. Felines outnumber humans by a ratio of approximately 10:1. They were introduced to combat rodents on fishing boats, but remained on the island and reproduced in large numbers.

In 1945, the island was a fishing village with a population of approximately 900. In 2013, the island was estimated to be home to 50 residents. In 2018, it was reported that the population had decreased to 13 with an average age of “over 75”. The island attracts tourists who visit the cats and give them food. 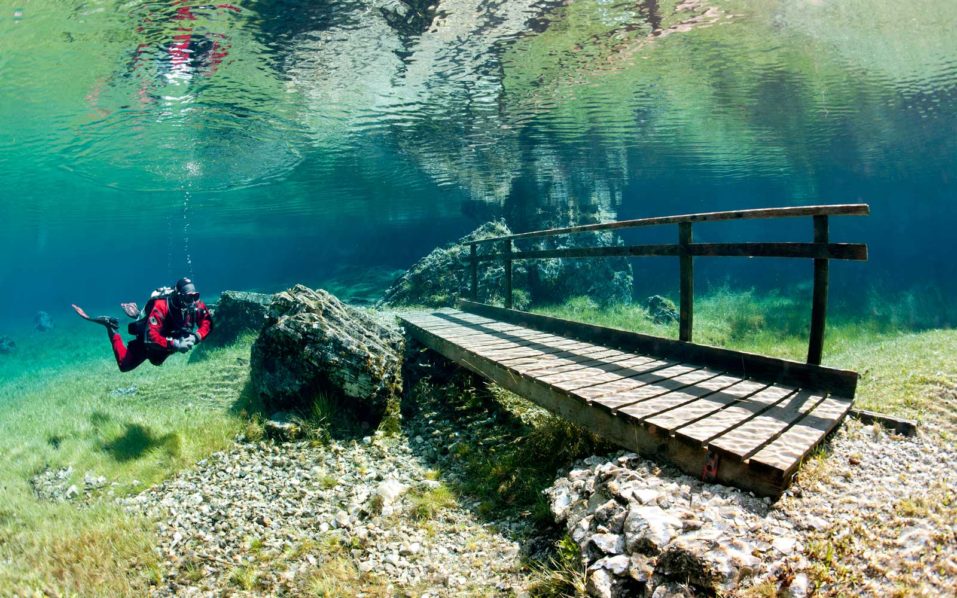 Green Lake, which for most of the year is no more than six feet deep, expands with the inflow of snowmelt, swallowing part of the park that surrounds it: trees, hiking trails, benches, bridges, and all. The lake’s depth reaches some 30 feet

The site has proven to be an attraction for divers, inviting them to plunge in and explore the spectacular underwater park.