Ajala The Traveller: The Man And His Journeys

Every avid Nigerian traveller or globetrotter has one time or the other been referred to as Ajala by their friends, families or acquaintances. Most even use the designation in their pseudo names; names like Ajalabug, Wondering Ajala, Ajalaman, The travelling Ajala. This vocabulary that has become so familiar and part of the Nigerian travel lingua still has little or less known about the origin of its name.

So, who is Ajala?

On April 27, 1957, in London, a 26 years old student of psychology, Mashood Olabisi Ajala embarked on a trip across 40 countries in Europe, Asia and Africa on his Vespa scooter wearing his full conspicuous agbada regalia with a cap to match. As a pre-medical student, Olabisi has previously undertaken a similar jaunt four years ago in the USA pedalling from Chicago to Los Angeles on a bicycle covering 3,800 miles in 35 days over ten cities. His journey which he nicknamed “This Safari” will cover 30,000 miles across 40 countries in nine months and return to London afterwards.

How did his journey go?

In his book “An African Abroad”, Olabisi narrated his encounter with the then president of Egypt, Gamal Abdel Nasser:

“Every day at 6 am for the next two weeks, I was waiting directly in front of his presidential palace hoping he would come out. On the 13th day of my hitherto unpromising efforts, around 5 pm President Naseer emerged from the interior of his residence heading for his car.”

In his agbada, the heavily bearded Olabisi screamed as loud as he could and caught the attention of the president. He was heartily welcomed in by the president.

Olabisi was very relentless and radical in his approach to travelling and this brought him fame and also trouble. In an interview, he was quoted saying -The world should send Doctors to Africa, missionaries to Chicago, Ajala said. The gangsters here need converting much more than we do. 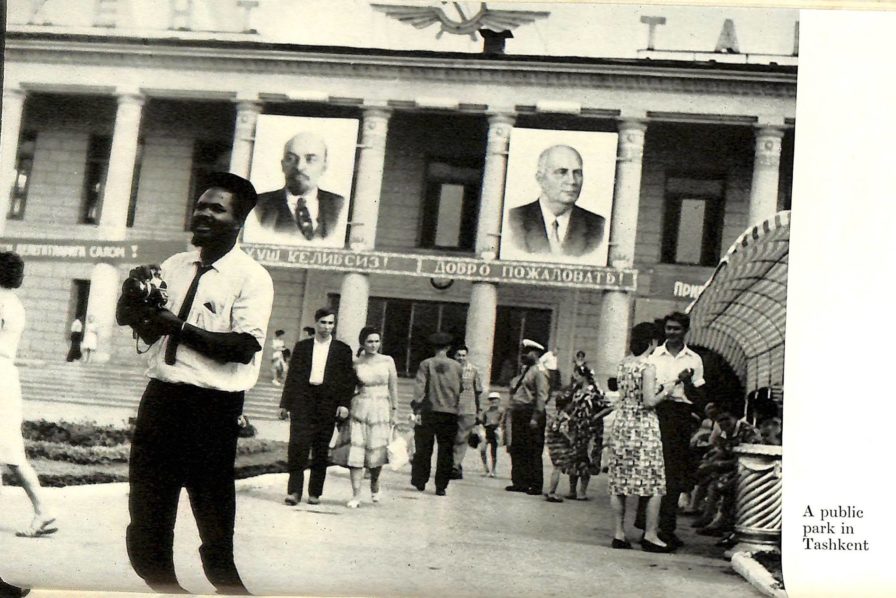 He also met with other great world leaders among them is the then Shah of Iran, the Soviet President -Nikita Sergeyevich, President of Egypt, Ronald Regan of America and the likes. His trouble particularly impressed Mrs Golda Meir the then prime minister of Israel, on meeting with Ajala she said as quoted in Ajala’s memoir ‘it’s not often we have this kind of trouble. Your bravery impressed us. We thought we should crown it.’

Crossing Lebanon on his way to Israel, the Lebanese security force arrested him believing he was on an espionage mission for the Israeli. He knew crossing of any border between Israeli-Arab frontier would be a death wish but was daring to continue his journey as this was the heat of the Israeli-Arab war.

His journey took him not just to the cities but to the rural places where no black man has ever set their foot, upon his arrival at a farm in Minsk in the then Soviet Union which is now in Belarus, his arrival caused some locals to flee in panic at the “frightening sight” of the black man invading their village.

He ended up spending more time than the initially proposed nine months, and during his sojourn, he got arrested on several occasions. He visited eighty-seven countries in his six-year globetrotting trip (ranging from North America to Eastern and Western Europe, through Africa and Asia and as far east as Korea, Indonesia and Australia). He documented all this in his book- The African Abroad”.

After his first journey previously in America, he expeditiously got fame for himself and accolades. All these got him a role in the film “White Witch Doctor” produced by 20th-Century Fox movies where he played the role of an African boy. 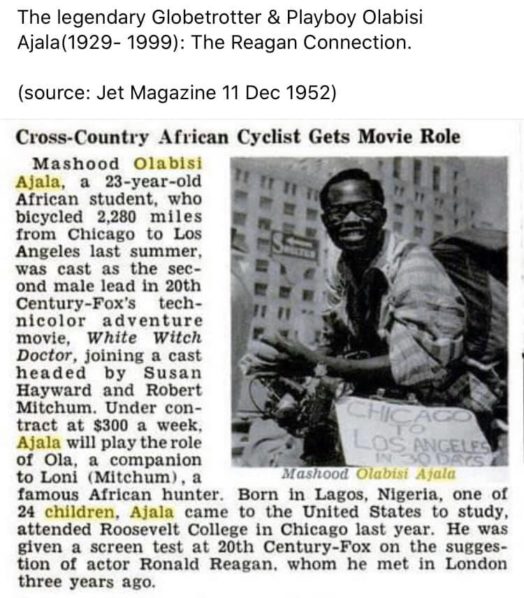 Why did he leave the USA to continue schooling in London England?

The intrepid traveller had a forgery case with the American immigration and was deported, he went on to protest against this by climbing an 80ft mast and refusing to come down for nearly 13 hours, his plea was that he was duped and didn’t commit the crime. The US government decided to deport him to London instead of Nigeria after he said he would face a tribal execution if he got deported home.

With his tremendous charisma and eccentric nature, he was the golden boy loved by the ladies, many of whom he met on his journeys. In his trip around the world, he married 5 women; an Australian lady, an American, a British model, a Nigerian woman in London and also another Nigerian in Nigeria. Upon his return to Nigeria, he became a publicist and his awesome showmanship got many musicians such as Ebenezer Obey, Ayinde Barrister and Sunny Ade singing about him.

In his last days, Ajala extravagance life became arduous to maintain and his wealth he had amassed over the years went gradually down to penury. In Lagos, he lived in a two-storey building in Bariga where he managed to live with stroke until he died in February 1999 at the age of seventy in a general hospital in Lagos.

It’s 63 years since he made his journey across the world, Ajala children are still in different parts of the world where he once journeyed. Ajala explored the unexplored and charted the hitherto uncharted. He made history. And also lived through life. He achieved a feat that no Nigerian or African might be able to achieve in our present day. His youthful decades was nothing compared to what the average person will do even in two lifetimes. His legacy lives on.