Sitting atop a rocky tombolo jutting into the Mediterranean Sea, the impressive Papa Luna Castle is one of Spain’s many filming locations of Game of Thrones. The 13th century castle in the town of Peñíscola first filled in for the slave city of Meereen in Season 4, when Daenerys Targaryen chose it as her residence. The castle’s Plaza de Santa Maria was transformed into a lively market, with extras hired from the region. You’ll recognize the familiar landscapes of Ramp of Felipe II, Artillery Park gardens and Portal Fosc as you follow in the footsteps of Tyrion Lannister and Lord Varys.

Peñíscola, in the province of Castellón, is located 90 miles north of the city of Valencia on Spain’s southeastern coast. It beckons visitors with its stunning medieval fortress, wide palm-tree lined Paseo Marítimo promenade running along miles of beautiful sandy beaches, and modern hotels that hug the coast. In 1972, Peñíscola was declared a Historical Conservation Area. 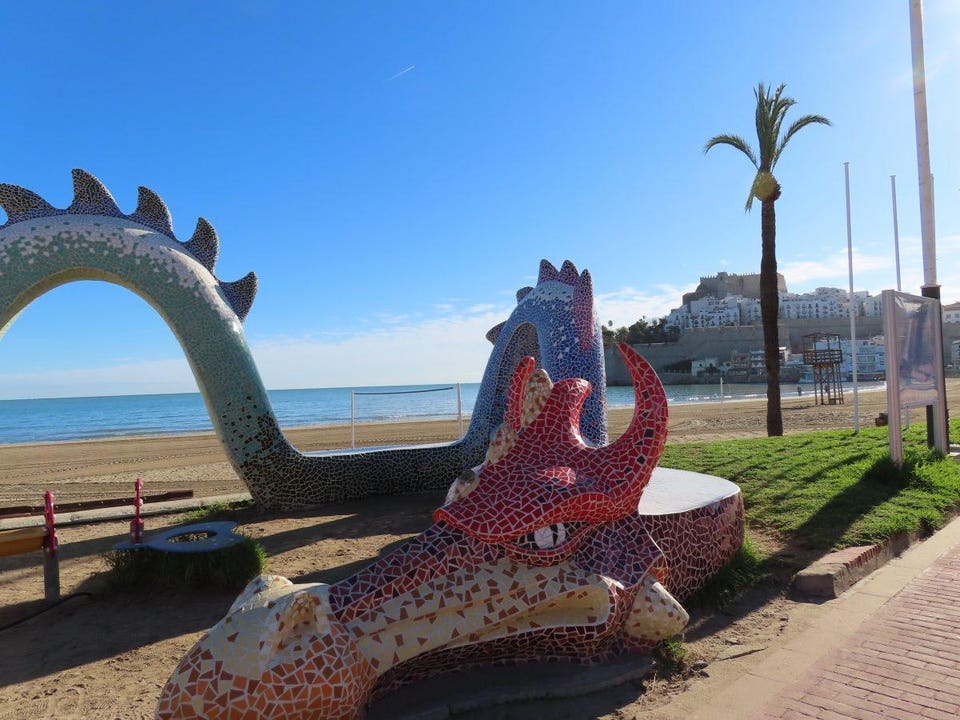 Built by the Templar Knights between 1294 and 1307 on the foundations of an Arab fortress, the impenetrable castle had many occupants, including its most famous: Pope Benedict XIII, known as Papa Luna. At the height of the Papal Schism in 1411, Papa Luna fought for his legitimacy, perishing behind the walls a decade later. The abundance of fresh water from an underground river that sprung through cracks in the boulders, allowed the occupants access to water even when they were isolated from the mainland. The castle remained a place of final refuge for men whose time ran out. Today, it attracts scores of travelers wishing to walk the walls that bore witness to history.

Visit the castle early in the morning for unfettered access to the grounds and rooms. Take in the panoramic views of the sea, city, and the surrounding hills from its rooftop terraces. Rising 200 feet above sea level, the castle has an imposing presence, with a bronze statue of the Pope perched at its entrance. It gets almost as much attention as the Iron Throne sitting right outside the entry to the peninsula. 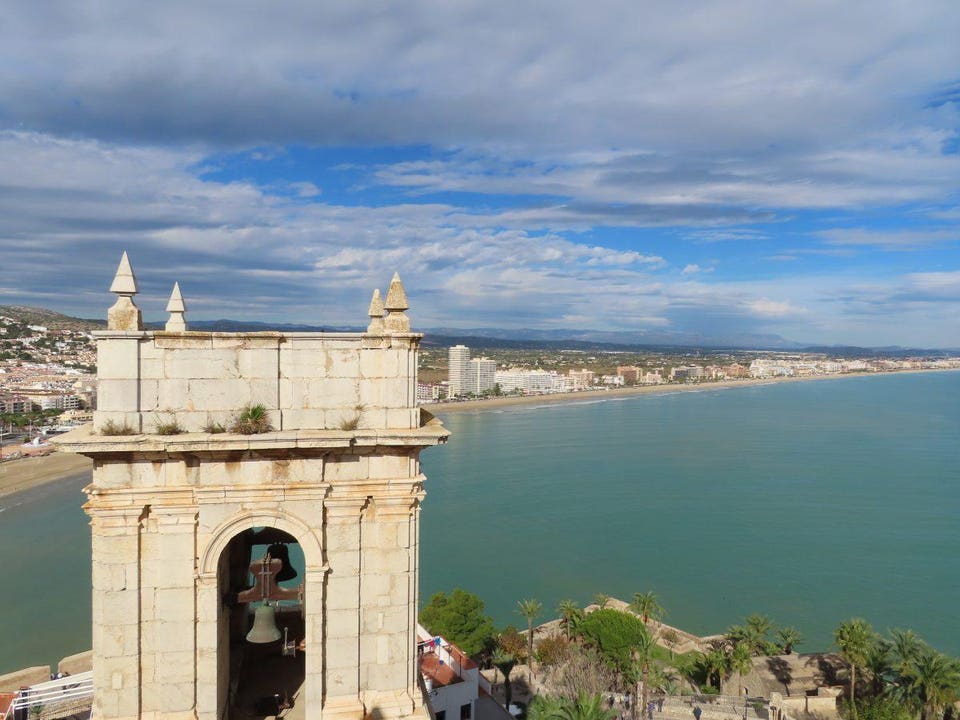 View from the terrace

The entrance hall, stables, and the guard corps bring the world of the Templars (1119-1314) to the life with filmed reenactments projected on the stone walls. After they fortified the castle and protected the area, the Templars disappeared from history, becoming a legend. Their architectural genius lies within the fortress walls of Papa Luna. Learn about their greatest heroes, victories and defeats as you walk through the arches and doorways. 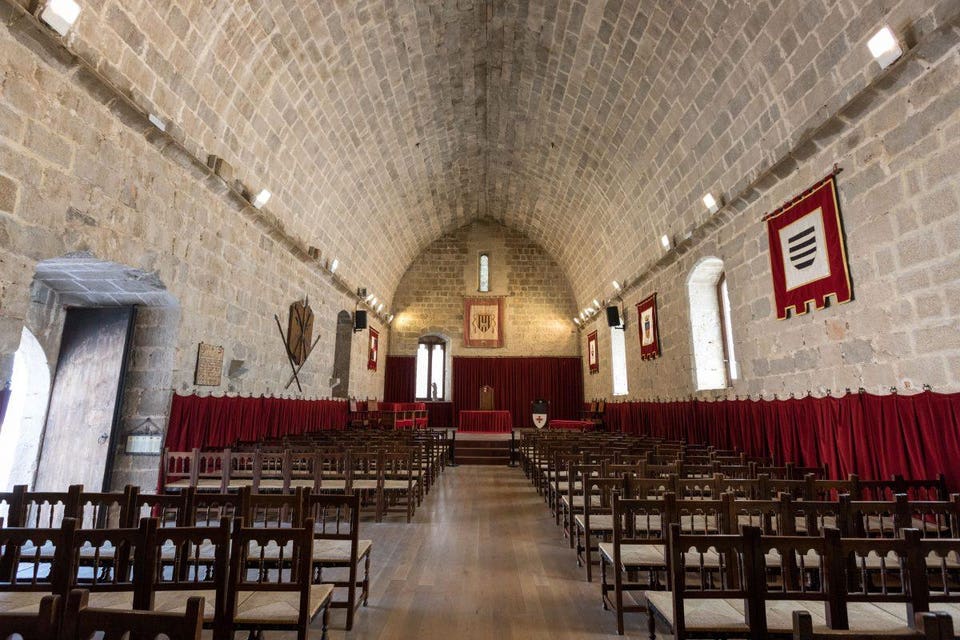 The castle’s courtyard opens to stunning views of the Mediterranean, providing access to the Gothic Hall, Water House, Castle Church, Conclave Hall, pontifical rooms, and upper terraces. The Peniscola Castle Gardens Bird Sanctuary, located at the foot of the climb to the castle, is home to rescued birds of prey. The Festival of Classical Theatre is held outdoors at the castle in July.

Making the ascent to the castle takes less than a half hour on foot. Take your time to enjoy the sea views as you travel up the winding cobblestone paths past whitewashed houses. Admire the ceramic balconies of the old buildings in the historic quarter, an architectural style left behind by the Moors who ruled Spain for hundreds of years. Stop by the seashell encrusted walls of Casa de las Conchas, built by the town’s first female tourist guide. 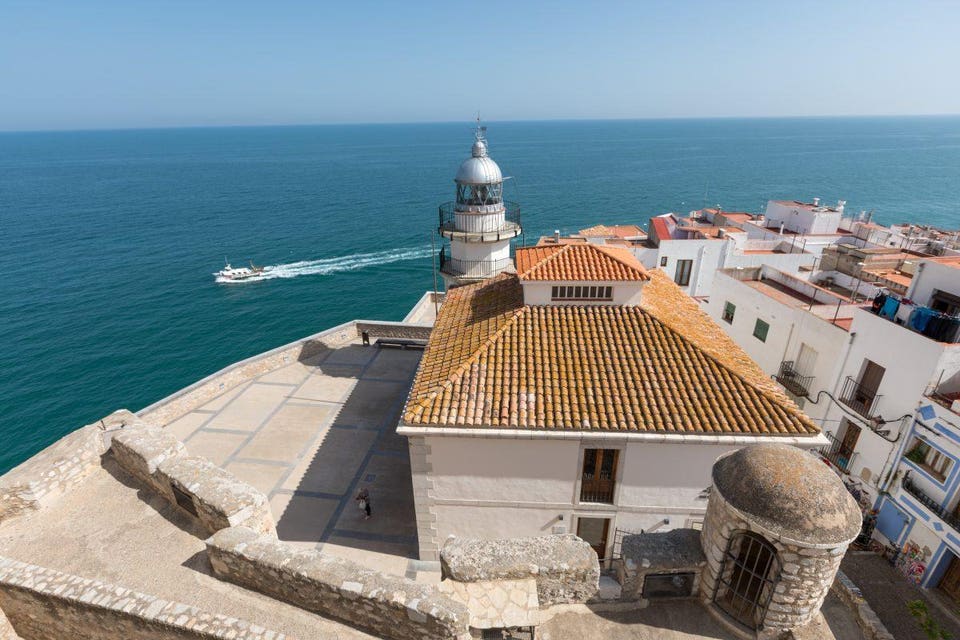 Halfway along the route brings you to the lighthouse of El Faro, built in 1892 with its light reaching a distance of 35 nautical miles. From there, curving steps lead to the sea. Legend has it that the stairway was built by Pope Luna in a single night.

Admire the church of Parroquia Santa Maria before the ticket office, boasting a Roman facade. Make time for the Sea Museum, located in the most easterly wall of the promontory, for exhibits on fishing, history and archaeology. Before leaving, take a peek at souvenir and ceramics shops that line the streets for postcards, handmade ceramic vases, and amber jewelry. 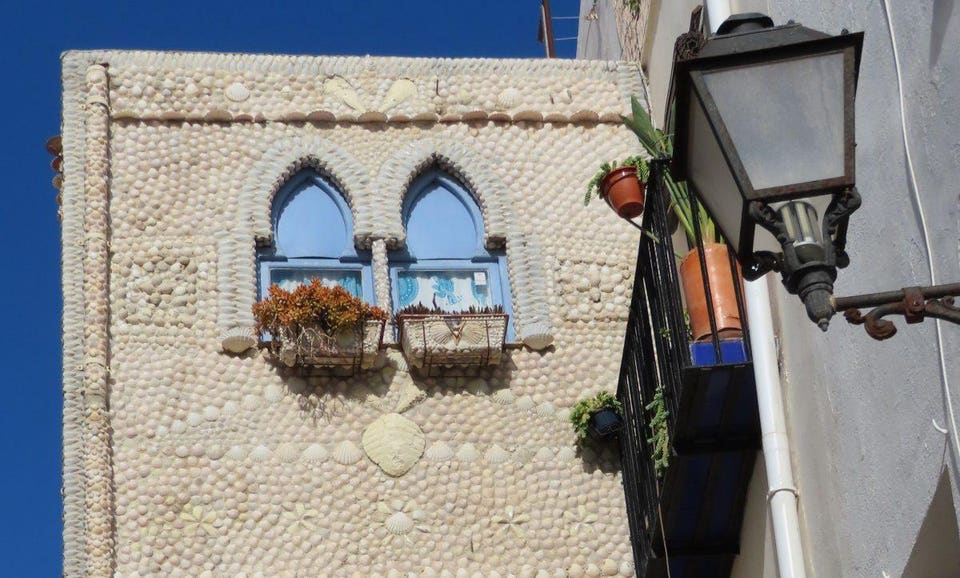 Peñíscola is traditionally a fishing village, an industry that still remains one of its economic activities. Every day at 5 p.m., spot fishing boats coming into the wharf and auctioning off their fish to restaurants and residents. Dozens of high-rise hotels and happening eateries serve fresh, authentic paella on beachfront Papa Luna Street. 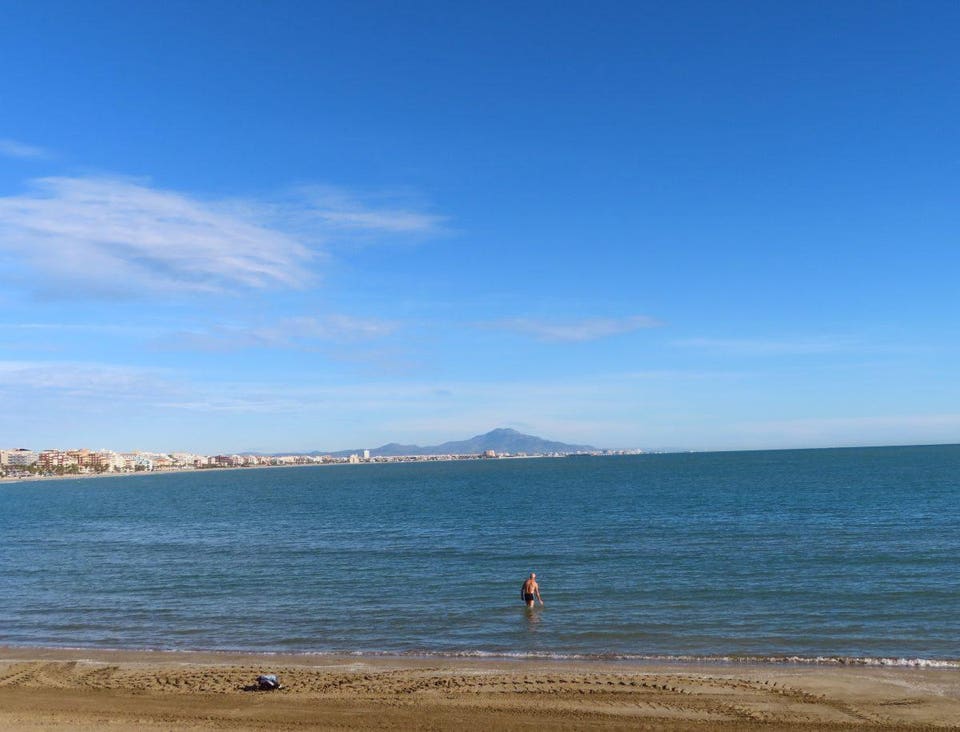 Peñíscola has two beaches, the North Beach and the South Beach, which sits behind the castle. The North Beach offers views of the walled city, and is fully serviced by lifeguards during the high season. Backed by the palm tree lined promenade, the pristine beach offers activities such as volleyball, sailing, and canoeing. It is also wheelchair friendly. If time permits, explore the many hiking trails in the nearby Natural Park of Serra d’Irta.