Ethical Elephant Tourism: Do It For Dumbo

After spending a life-changing week volunteering at Elephant Nature Parkin Thailand with my family, helping to care for the rescued animals who had endured unthinkable abuse at the hands of humans, I was very concerned about Disney’s new, live-action remake of Dumbo.

I was afraid that, if it kept the same ending as the original – Dumbo and his mom remain in the circus – the Disney effect would prevail and people would be flocking to shows featuring performing elephants just like they bought (and ended up returning) dogs after 101 Dalmatians.

This becomes a problem once you learn the horrific truth about how the animals are “taught” to perform and give rides to humans (spoiler: it involves a torture chamber known as the “crush box”).

After seeing the new movie, I’m actually hoping the Disney effect does prevail because, this time, it would mean people will refuse to support shows featuring performing elephants.

Tim Burton was apparently the right person to update the story of Dumbo because his version is dark and cruel – just like the industry that continues to abuse elephants for money – yet it grants the request of People for the Ethical Treatment of Animal to change the ending of the movie.

In an open letter to Burton, PETA Senior Vice President Lisa Lange had written, “We’re hopeful that in your adaptation of Dumbo, the young elephant and his mother can have a truly happy ending by living out their lives at a sanctuary instead of continuing to be imprisoned and abused in the entertainment industry.”

That happy ending does occur onscreen, which may help it come true in real life.

Lek Chailert at Elephant Nature Park with one of the beloved elephants she rescued.

After all, Ringling Bros. and Barnum & Bailey Circus finally succumbed to pressure from animal rights groups and closed after more than a century.

It’s time for every other show featuring performing elephants to do the same, and the only way that will happen is if people stop buying tickets.

The same holds true for elephant rides, which make up a huge part of the tourism industry in Thailand.

Lek Chailert, founder of Elephant Nature Park and Time magazine’s Hero of Asia, understands that camp owners need to make a living so she’s come up with an alternative. She’s changing their model and showing them they can be successful by transforming their trekking businesses into compassionate sanctuaries where tourists can interact ethically with the animals.

Instead of riding an elephant, you can help prepare their food, feed them and watch them in their natural habitat. On the Asian Elephant Projects website, which is supported by Chailert’s Save Elephant Foundation, there’s a list of places throughout Asia where you can spend a half day, day, overnight or even a week with the elephants. These are the ONLY places you should give your money to. 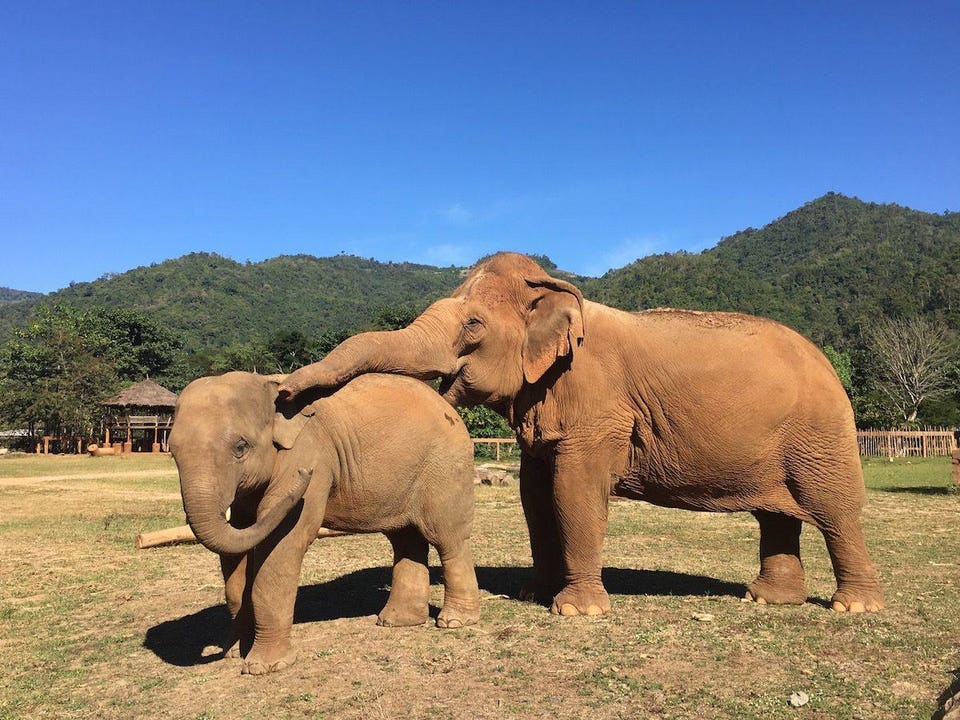 Real mother and baby elephants should be together in their natural habitat.

I wish Disney had ended Dumbo with an onscreen message and a website moviegoers could go to for more information about ethical elephant tourism. Their influence is so strong, they could possibly change the whole industry themselves, and Dumbo could become the poster pachyderm.

But since they didn’t, travelers – and the travel industry itself – are going to have to take it upon themselves to spread awareness. Once anyone with an ounce of compassion understands what elephants go through in order to entertain people, it will be impossible for them to support the abuse.

To get a real understanding of the situation, watch the documentary, Love and Bananas, which follows Lek Chailert as she rescues an elephant, bringing her across Thailand to live out her life peacefully and naturally at Elephant Nature Park.

Change is coming slowly. Lonely Planet has removed all articles promoting elephant rides from their website and promised to no longer include them in their guidebooks. Every single travel website, book, article and blog should do the same. Travel agents, tour operators and hotel concierges should pledge not to recommend elephant rides to guests, and to suggest visiting sanctuaries instead.

Promote ethical elephant tourism, and let elephants just be elephants. Do it for Dumbo.