In 2000, when Jasmin Imamović became mayor of Tuzla, it was a dilapidated, swampy mining settlement short on prospects. Bosnia-Herzegovina’s third-largest city had suffered badly in the Bosnian war, and from recessions, low wages and exodus of people since.

In an apt metaphor, the city was also sinking. Tuzla’s name is derived from the Turkish word tuz, which means “salt”: the city is built over the ancient Pannonian Sea, which was mined for its rock salt over several centuries. By 2000 it was causing entire sections of the city centre to sink.

Imamović’s solution was to turn Tuzla’s biggest problem into its biggest asset. He employed a team of experts to create a fake lake, by siphoning saltwater to the surface and keeping it at a stable level. The result was the 12,000 sq ft Pannonian Lake, completed in 2003.

Now the area, previously foetid marshland, has been transformed, with children playing in the turquoise water, couples sunbathing on the gravel beach and families strolling to the old town for burek, a Bosnian meat pastry. Last summer it attracted up to 13,000 people a day, many drawn by the supposedly medicinal properties of Europe’s only salt lake.

Tuzla’s economy has also changed massively. The tourism and service industries are now its biggest sectors – a sharp change of direction for a city previously known for its coal plants and smoke-filled skies.

Before the first tourists arrived, many locals opposed the plans. “People still have different views about the lakes,” says Tuzla native Dalibor Brkic, 42. “Some would rather see the money invested in other industries, especially those who were employed at the now-defunct coal and salt mines before the war. But today most people agree that the lakes are a good thing.”

A second lake and artificial waterfalls were opened in 2008, incorporating an archaeological park and replica Neolithic lake dwellings, and a third in 2012.

Other cities are also trying to boost their profile by artificially creating “natural” tourist attractions. The UAE’s Palm Jumeirah and The World, some of the world’s largest artificial islands, are an extreme example; a rather more considered effort is Barcelona’s beach at Barceloneta, created as part of the city’s facelift for the 1992 Olympic Games.

The beach, the Catalan capital’s largest, is credited with catapulting Barcelona into the top ranks of European travel destinations: the yearly number of visitors staying in hotels in the city rose from 1.7 million in 1990 to 8.9 million in 2017.

Previously a neglected strip of waterfront populated by fishermen and residents pushed out of the centre, the Barceloneta neighbourhood is now the face of the city and one of its most vibrant areas. 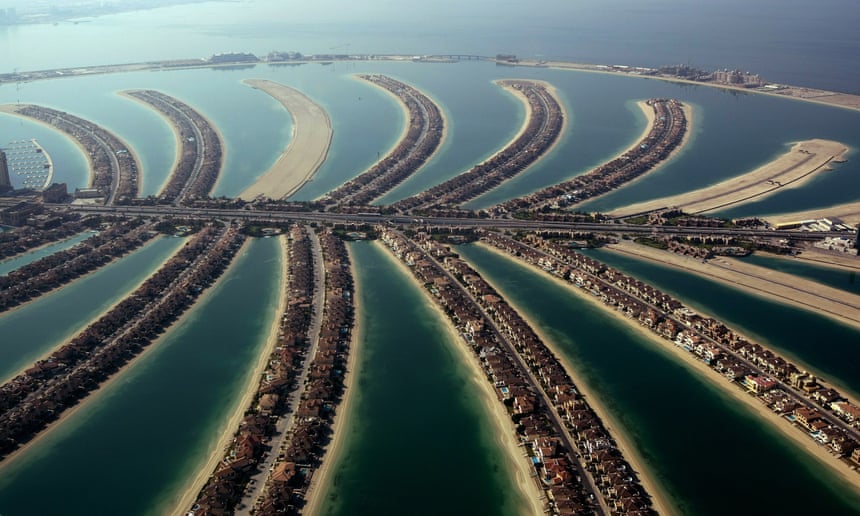 Not all Barcelona residents are enamoured with their artificial beach, though.

“Barceloneta is kind of a halfway house in terms of sustainable placemaking success,” says Malcolm Allan, president of the place branding strategist Bloom Consulting. “It got people into an urban space that had not been used properly and transformed it. But any project like that needs a good place management strategy. Otherwise there is the risk of having a spillover effect that could negatively impact residents and workers.”

Indeed, locals are increasingly blaming the beach for attracting too many tourists and thereby eroding local culture. The city has been plastered with banners, stickers and posters urging tourists to stay away.

Maintaining the beach is not easy. In 2016, a study showed that about half of Barceloneta’s sand had been swallowed up by storms and the sea. Various attempts have been made to stabilise it, including several rounds of costly top-ups with extra sand. The port of Barcelona, which is responsible for around a third of the Barceloneta beach, a strip called Sant Sebastià, is set to invest €5m in 2020 for further upkeep.

Amsterdam has also tried the fake beach approach. When the Dutch capital initially sought to create more space for urgently needed housing and businesses by erecting an archipelago of artificial islands to the east of the centre, many people were sceptical. After a referendum failed to halt the project, construction began in 1998, creating a whole new suburb on manmade land in the IJmeer, Europe’s largest freshwater lake. Today there are seven islands that make up the IJburg neighbourhood, with 9,000 dwellings and 25,000 residents.

Dries Drogendijk, the project manager, remembers how arduous it was to get environmental organisations on board. “IJmeer is a protected important natural habitat for birds, so we had to promise to improve their habitat, not destroy it,” he said. Two hectares of artificial mussel banks were built to increase the bird population.

In 2004, Amsterdam had problems selling the newly built properties. “That’s when the first small beach was made,” Drogendijk says. “It was a placemaking campaign, to make the area more attractive. It proved hugely successful.”

But the project turned out to be expensive. “The building and maintenance costs for IJburg beach are high and increase every year,” says Drogendijk. “But it’s worth it. It’s an investment.”

The transformed Cheonggyecheon stream that runs through downtown Seoul is another striking example of manmade nature, hailed by some as a great urban renewal project and criticised by others as the costly vanity project of a politically ambitious mayor.

Before its dramatic $900m (£615m) restoration in 2003, the Cheonggyecheon was a polluted waterway covered by a four-lane elevated expressway. The city government decided to tear it down and open up the waterway with greenery and pedestrian paths, to encourage a public space for Seoul’s citizens and boost the use of public transport instead of cars. In its first three years the project was credited with contributing to a 45% decrease in vehicle volume along its route, and a 15.1% increase in bus rides. 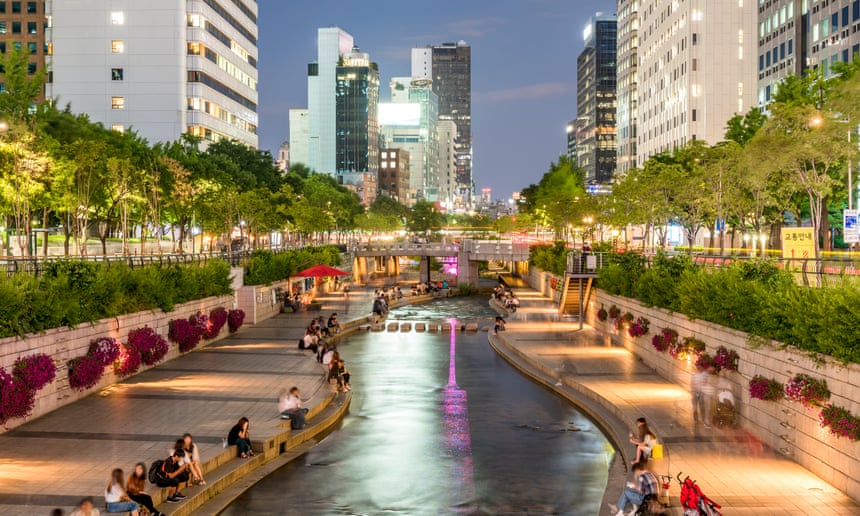 Its critics, however, argue that the Cheonggyecheon does not exactly represent a return to nature. The stream’s bed is made of concrete, and hundreds of thousands of tons of water are artificially purified and pumped into it every day, while taxpayer-funded maintenance costs have long exceeded original estimates.

Whether any of these projects are viable in the long term remains to be seen. “Random, sporadic examples of nature in cities won’t work in the long run,” says Allan. “Only a city-wide concept will be sustainable.”