Go To Ireland in 2019 for Great Experiences And Good Value

Ireland is on a roll, with the number of travelers from the USA doubling since 2013, says Alison Metcalfe, executive vice president, North America, for Tourism Ireland. Since the new tourist season in Ireland unofficially begins on St. Patrick’s Day, it seemed a good time to look at some of the reasons visitors are flocking here. Travel experts Kristen Fernandez, who is managing parter at Elli Travel Group, a Virtuoso Agency, and Marybeth Hillier, senior travel advisor at Travel Edge, also a Virtuoso Agency, talk about why Ireland is a great destination for 2019. I’ve added a few suggestions, too, based on a recent trip to the Emerald Isle. 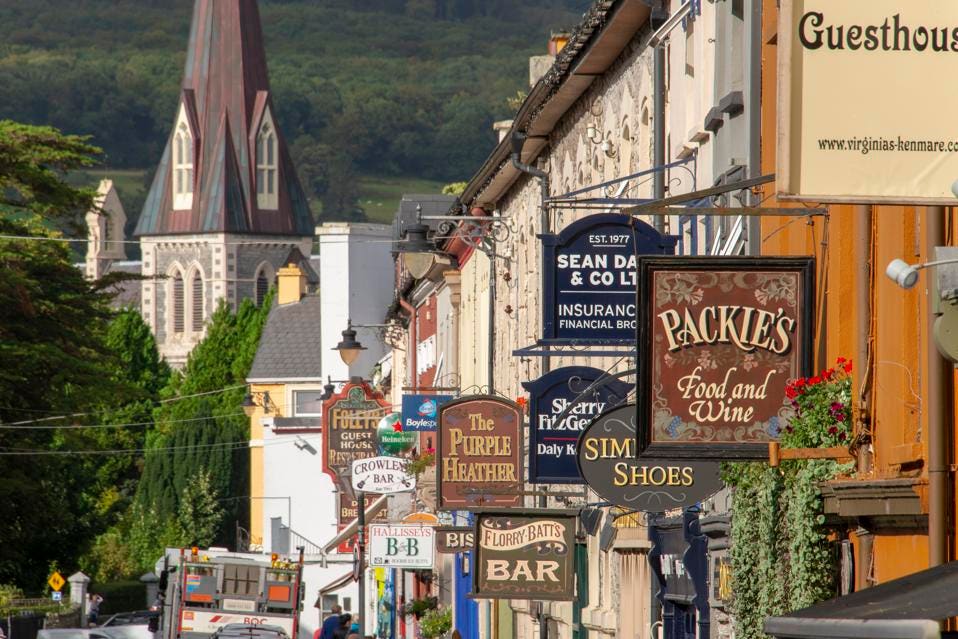 Kristen Fernandez: “On the whole, Ireland tends to be a more affordable destination than Great Britain, and offers strong value as compared to Italy or France. In general, Dublin’s hotels cost about 25% less than comparable London hotels, hovering between €400 and €465 per night during the peak summer months. A similar caliber hotel in the cities of Paris or Venice runs around €850 and €580 respectively. Moving out to the countryside, in regions like County Kerry, luxury hotels often go for under €355 per night in high season.” 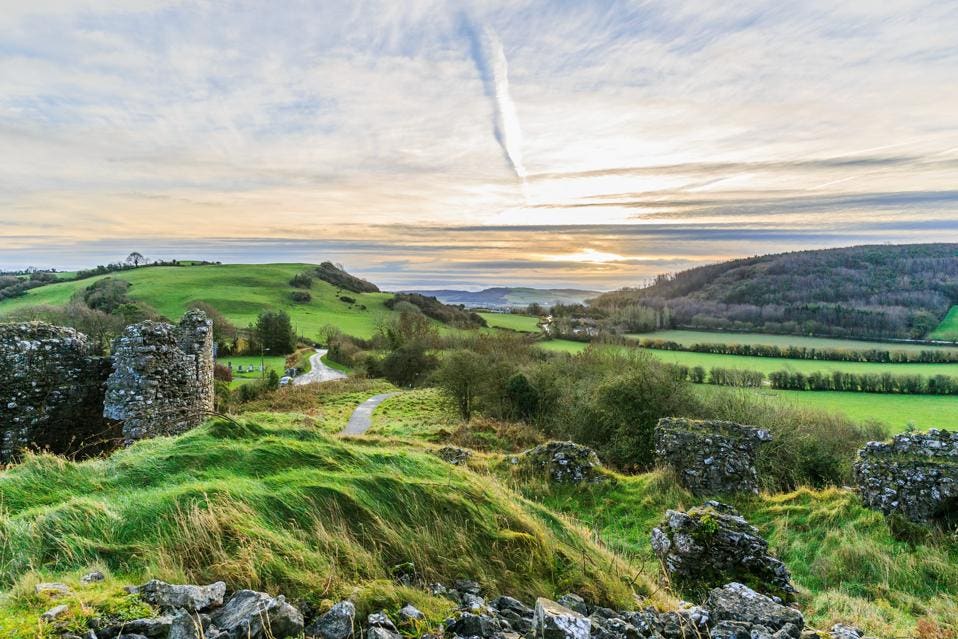 The Irish landscape in winter.

If you live in a northeastern U.S. city, Ireland can be a good destination for a long weekend.

With typical flying time from New York to Dublin at 6 hours and 11 minutes; and Boston to Shannon at 5 hours and 50 minutes (a flight on this route even clocked in at around 5 hours due to favorable tail winds), a hop over to Ireland can work for a four- or five-day jaunt.

And re-entry is easy.

Travelers heading to the U.S. go through immigration and customs in Dublin and Shannon as part of CBP‘S Preclearance program, so your flight from Ireland lands at a domestic terminal.

There are plenty of under-the-radar gems to visit. 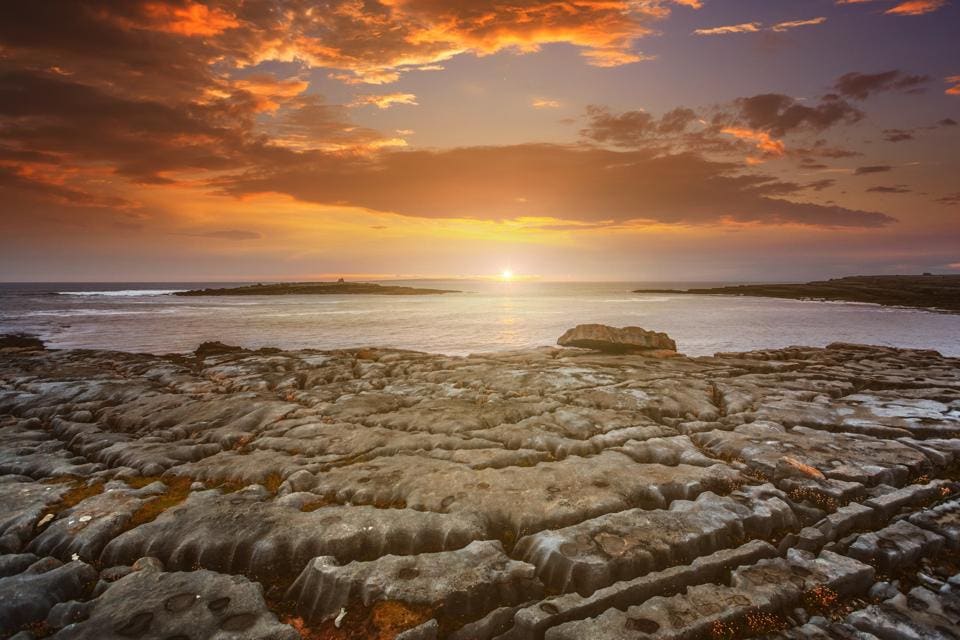 The rocky coastline of the Burren at Doolin, County Clare.

Marybeth Hillier: “The Burren is a great rocky expanse of limestone in County Clare near the Cliffs of Moher and Galway. Good for easy hiking, it is also home to many ancient ruins and is known for its flora and fauna.” 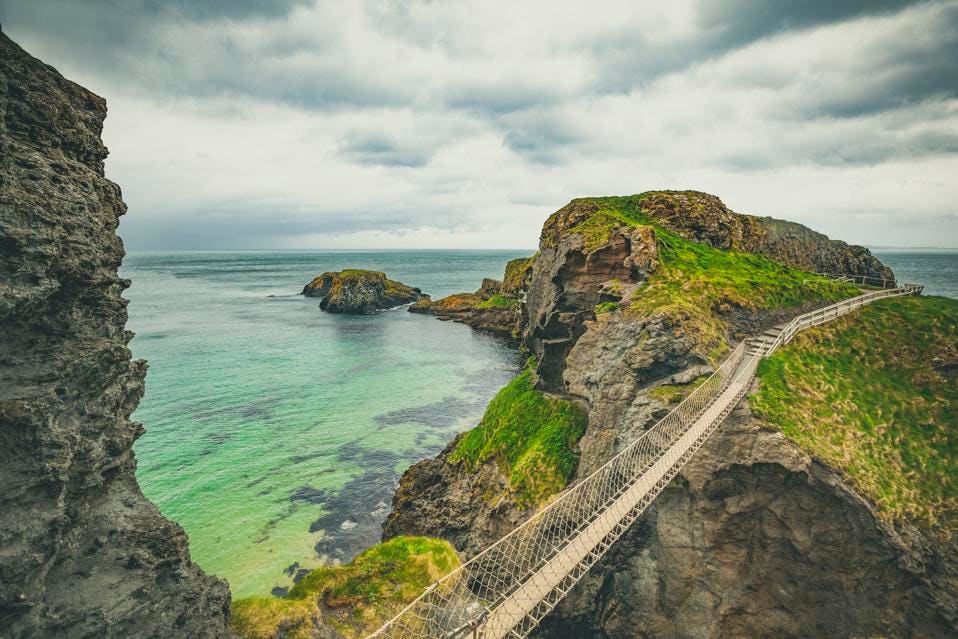 “The Carrick-a-Rede Rope Bridge in County Antrim, about a two-hour drive from Belfast, is a suspension walking bridge spanning the ocean between the mainland and Carrickarede island. The views are breathtaking, and on a clear day you might be fortunate enough to see Scotland from the island.” 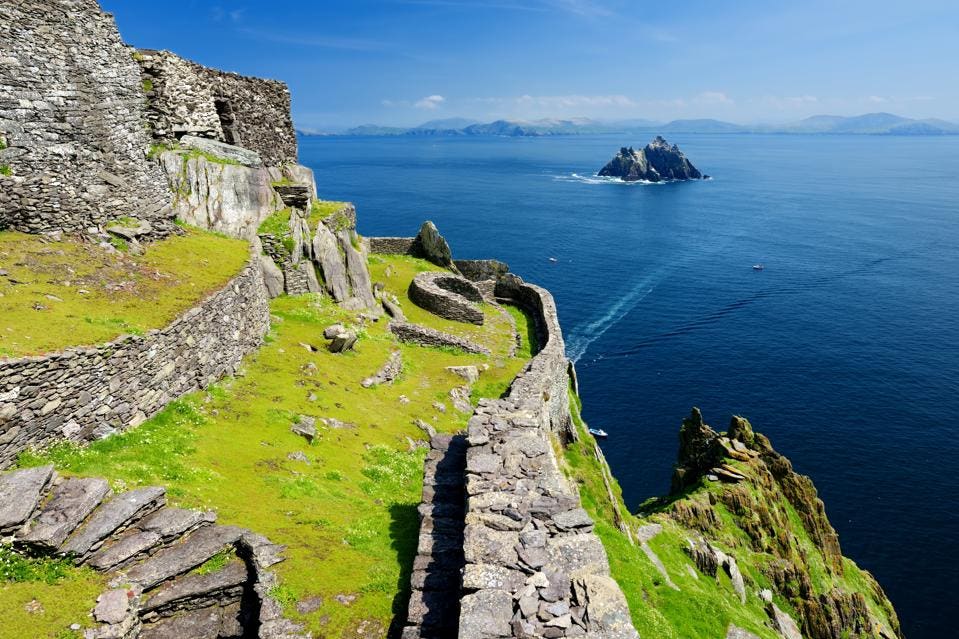 “Skellig Michael is a remote island off the coast of County Kerry and a UNESCO World Heritage Site that came to fame when parts of the last two Star Wars movies were filmed there. Only 13 boats can dock, so pre-planning is a must.” 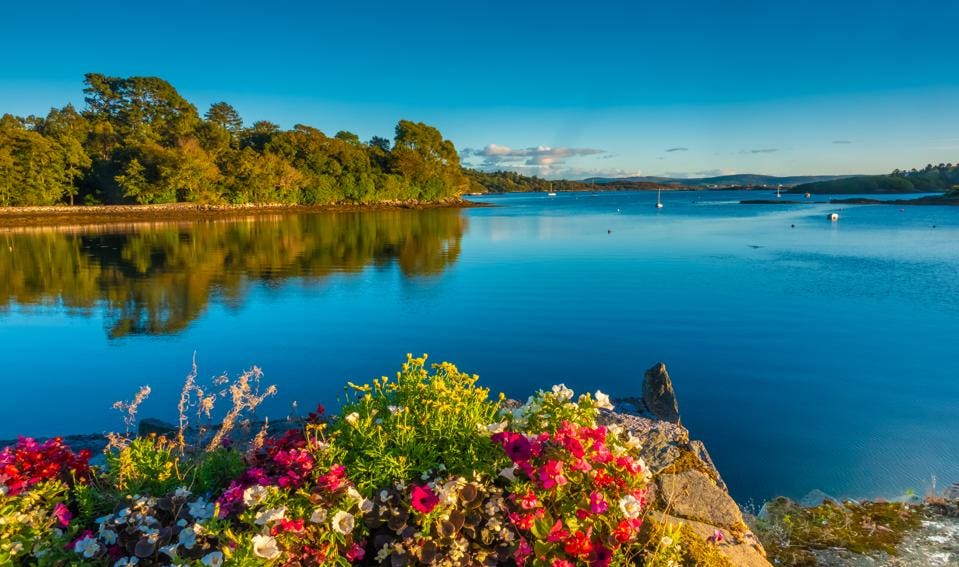 Glengarriff Bay on the Beara peninsula.

Fernandez: “You can avoid many of the tourists on the Ring of Kerry by driving the Ring of Beara instead, which is equally stunning. The small town of Kenmare in County Kerry often falls under the shadow of nearby Killarney. Our clients love Kenmare for its bayside location, which is good for kayaking, and for the access to great hiking in the Caha Mountains. To note: Kenmare also has some of the best ice cream.”

Ireland has five-star castle hotels but if you decide to rent a private castle here’s what to ask.

Fernandez: “Do you have air conditioning? [The summer of 2018 in Ireland was very warm.] How far are you from the nearest town? When was the castle last updated—some have plumbing from the 1800s. Is there a property manager nearby? Does the castle come with staff or are we making our own beds each morning and cooking our meals?” 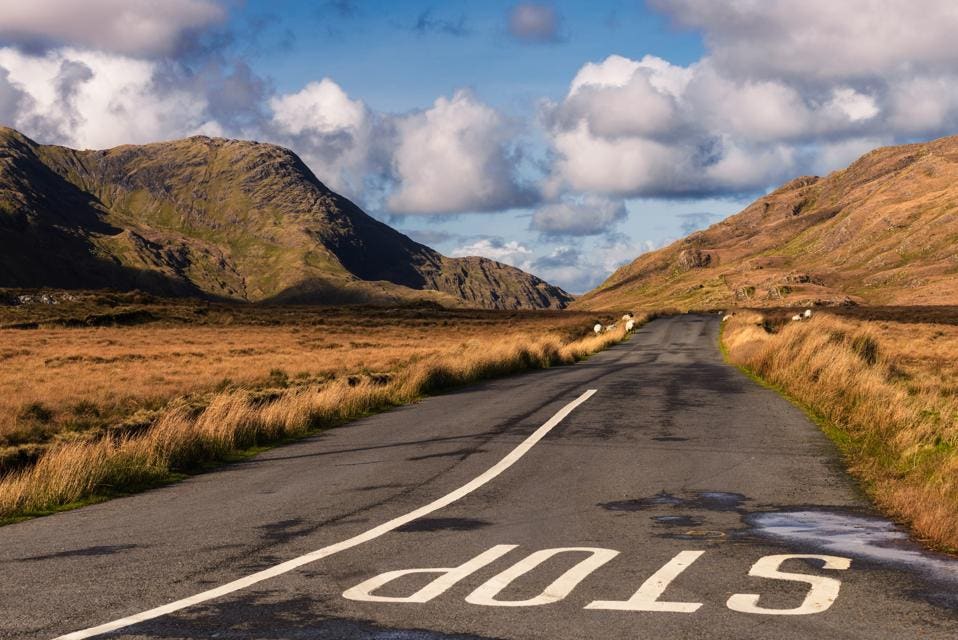 A road in Connemara, County Galway.

An Irish driver can teach you a lot about Ireland.

Fernandez: “In most destinations, having a driver is not often considered a ‘special’ experience, but in Ireland it becomes special. First, most Americans are uncomfortable driving on the ‘other’ side of the road, so a driver becomes almost a necessity. Yes, they’ll get you from A to B safely, and you’ll be able to have a pint of beer and not worry about Ireland’s zero-tolerance, drunk-driving laws. However, a driver in Ireland becomes your ambassador. Most Irish driver/guides are enthusiastic and passionate and will significantly add to your overall experience. And keep in mind Ireland is a compact enough country that most driving times from destination to destination are under three hours.” 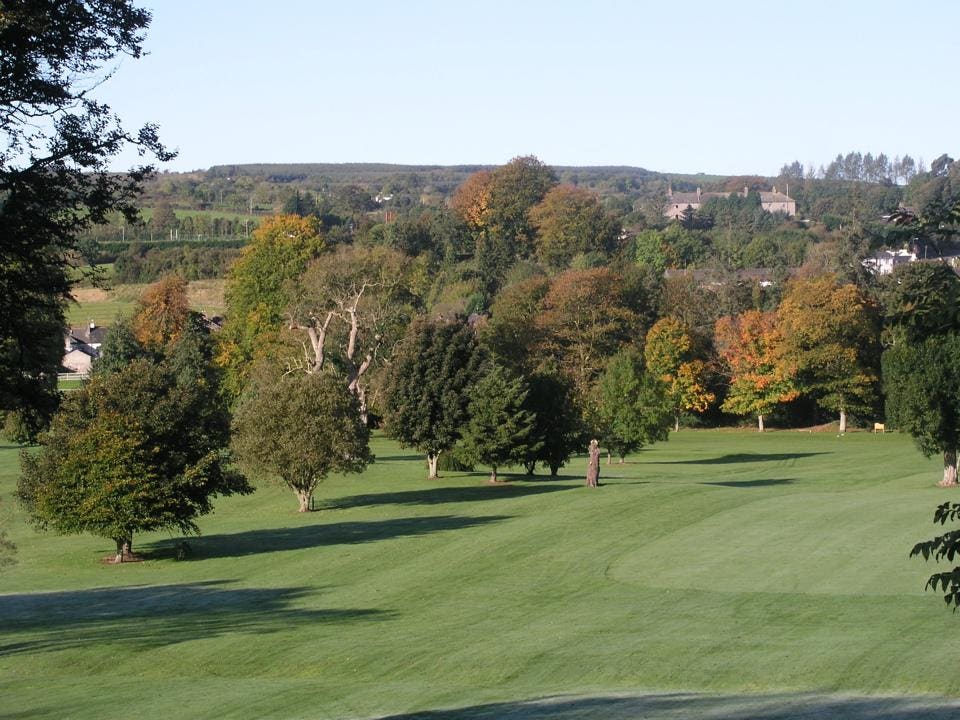 The course at Castlecomer Golf Club in County Kilkenny.

Fernandez: “Some golf courses are private and will offer reciprocity to non-members, but you may need your home golf club to draft a letter on your behalf for access to play. Some private courses have certain days and times when they allow non-members. If you’re staying at a 5-star hotel, most likely the hotel concierge has a relationship with nearby golf clubs. With enough advance notice, they can often secure tee times for guests.”

Note to golfers—book the right vehicle.

Fernandez: “If you’re bringing golf clubs to Ireland, keep in mind vehicles there tend to be smaller than in the US. You want to make sure you have ample space for passengers and your clubs. Some travelers underestimate the amount of available space in the ‘boot’ (trunk). If you’re not driving let your driver know whether you are bringing clubs.” 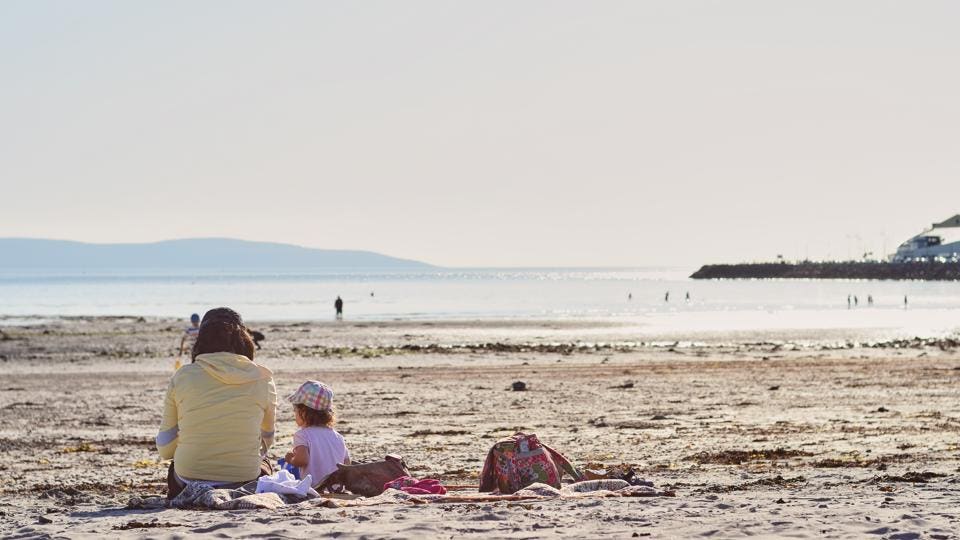 A beach in Galway.

Maybe you don’t go to Ireland to soak up the sun, but the country has great beaches.

Hillier: “There are more than 900 miles of coastline and exciting surfing beaches on the Wild Atlantic Way. Inchydoney, near Cork, for example, might be a good add-on to a tour. As for water temperatures, as they say, it’s all relative. If you are used to warm waters off the coast of Florida, then, perhaps, beach going would be unpleasant. If you frequent beaches with chilly water on the Pacific coast of the U.S., then the Wild Atlantic Way might be fine.” 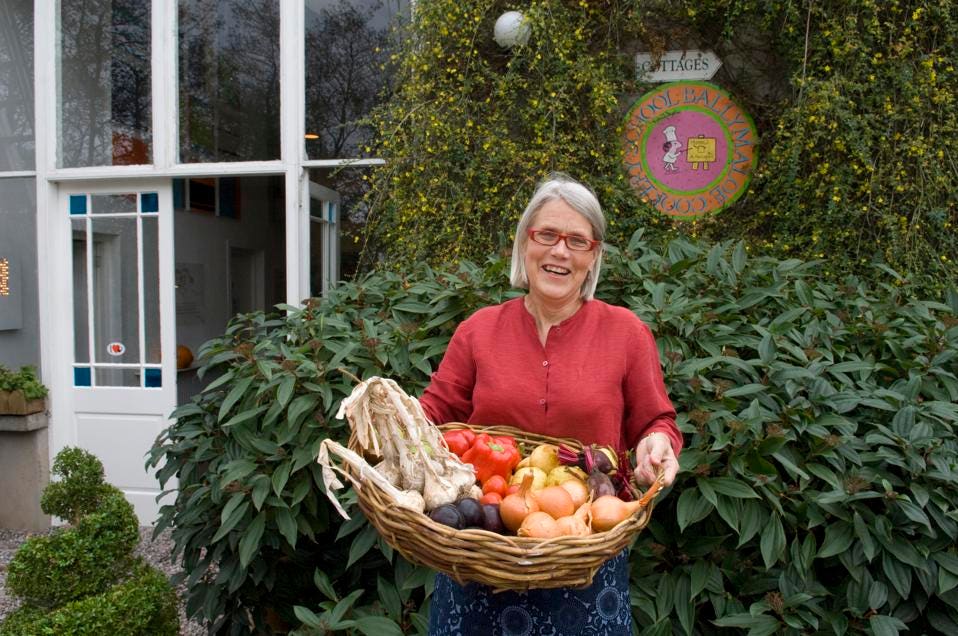 Darina Allen, culinary star, author and founder of the Ballymaloe cooking school. Her mother-in-law, the legendary chef and restaurateur Mrytle Allen, was a pioneer in the farm-to-table cooking movement. (Photo by Eleanor Bentall/Corbis via Getty Images)

You can have an amazing foodie vacation.

Although Irish cooking suffered from stereotypes for  years, it was long a cuisine that relied on fresh, local produce, The great Myrtle Allen of Ballymaloe, the Michelin-star restaurateur and pioneer in the farm-to-table and organic cooking movements, had a huge impact on the perception of Ireland’s cuisine beyond its borders, influencing the culinary styles of many of the country’s top contemporary chefs. You can not only dine well in and around Ireland, but also have planners create special food-centric itineraries for you. “Such companies as Dream Escape will put together a bespoke culinary experience and can even include a round or two of golf along the way,” says Hillier. Tourism Ireland is a great resource for culinary travel ideas, she adds. “It has links to farmers markets and food trail experiences.“ 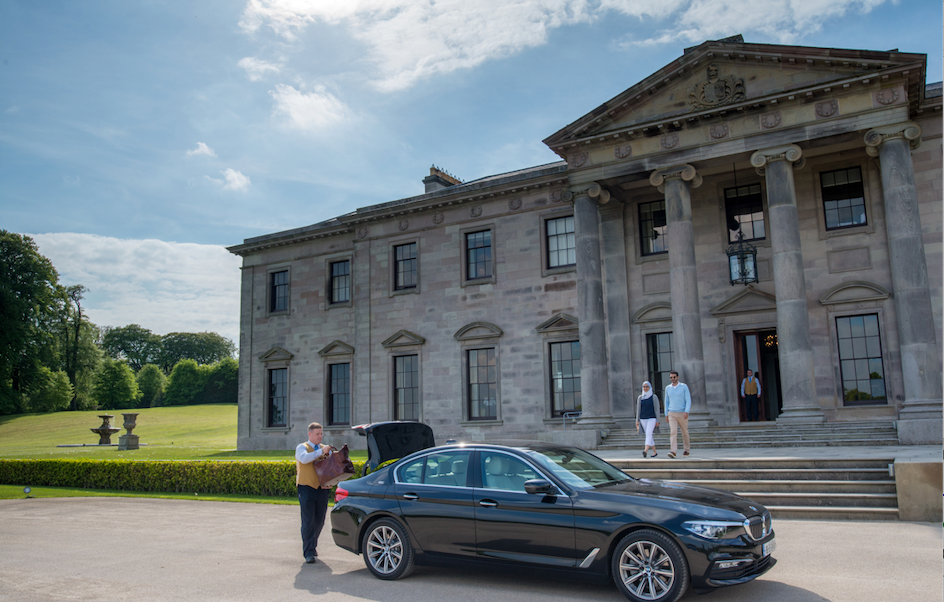 For a very special luxury stay, go to Ballyfin.

Hillier: “Ballyfin, open several years now, is exciting and magical. It is not a hotel but an experience. You feel as though you have stepped back to a gentler time, but with all the amenities of the 21st century. The service is seamless, the cuisine, some of the best I have ever had, and the wine cellar is extensive. The gardens and grounds are beautiful and peaceful.” 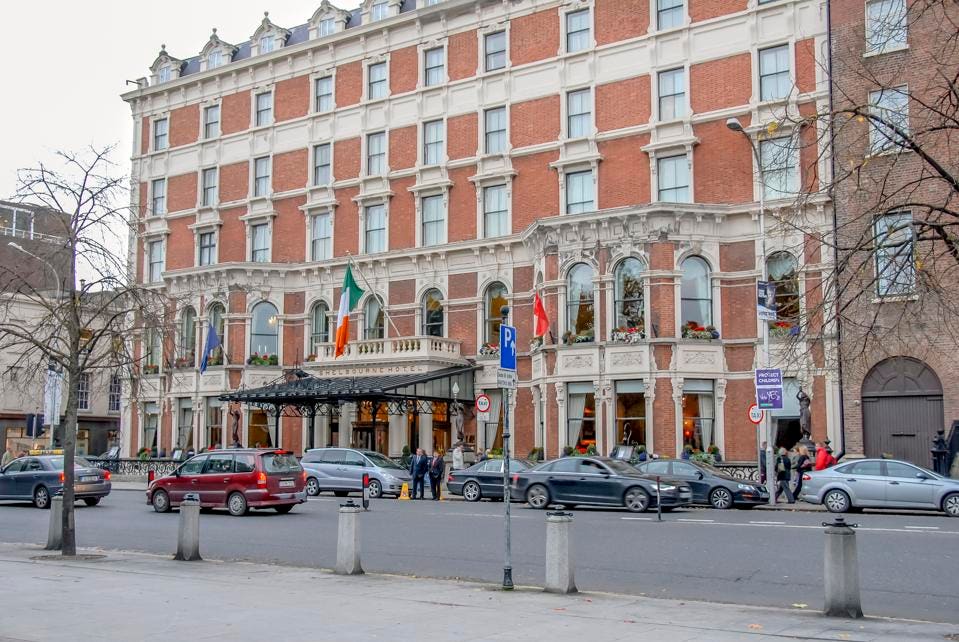 “The Shelbourne is an icon in Dublin where the Irish Constitution was drafted in 1922 in room 112, now known as the Constitution Room. It overlooks St Stephen’s Green,” says Hillier. The Merrion Hotel, built in the 18th century as townhouses for elite Dubliners (the first Duke of Wellington may have been born in one of the houses), is where you’ll find the two-star Michelin restaurant, Patrick Guilbaud. “I would recommend the Merrion main building,” says Hillier. “Having afternoon tea in the elegant Georgian drawing room gives you the feeling of being in Dublin hundreds of years ago.” 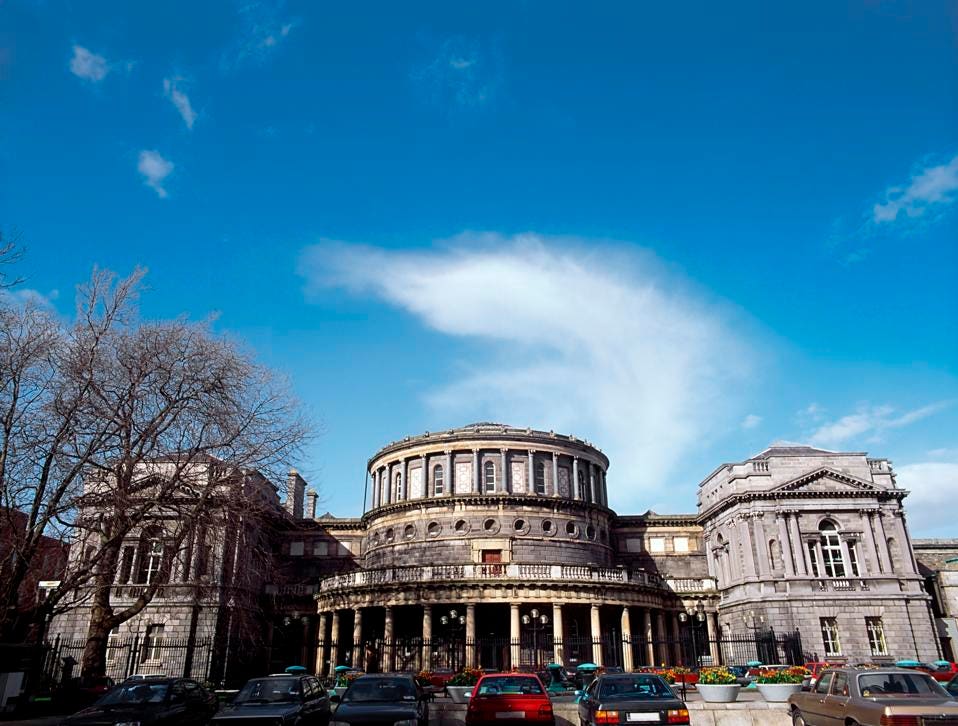 Ireland is an increasingly popular destination for genealogy vacations.