Iranian students with valid visas turned back at US borders

A mad dash to collect documents, two overseas trips, a nerve-racking interview followed by months of anxious waiting. After securing admission to some of the world’s most prestigious universities, this is the gruelling and costly process Iranian students go through to obtain a student visa to the United States.

But since August, at least 17 Iranian students have had their dream of studying in the US dashed after landing in US airports, valid visas in hand. They were instead sent home and most were given five-year bans on returning to the US, after Customs and Border Protection (CBP) officers deemed them “inadmissible”, a label immigrant rights advocates say is broad and can be used at the customs officers’ discretion.

Immigration lawyers said the trend began last year but has intensified in recent weeks amid high political tensions between the US and Iran, after the administration of US President Donald Trump ordered the killing of Iranian General Qassem Soleimani on January 3.

Reihana, who wished to be referred to by her first name only, boarded a plane from Tehran to Boston, Massachusetts last September, excited at the prospects of beginning her Master’s programme at the Harvard Divinity School.

But when the 35-year-old landed in Logan airport, she was pulled aside by CBP officers for additional questioning. She was led to a separate room where she was asked questions about her travels, work experience, family, studies and her Iranian mobile phone number. Then, an officer searched her luggage and asked her about a Quran that she was carrying.

She said she was then asked about what Iranians think about the explosion in Saudi Arabia, referring to the September 14 drone attacks on two major Saudi Arabian oil facilities. Yemen’s Houthi rebels claimed responsibility.

“I said I was packing my things during the past days, and I hadn’t been reading or following the news,” Reihana recalled. “I explained I didn’t know much and that people generally hoped the situation would get better.”

Afterwards, she says officers took her laptop and mobile phones and asked her to give them her passwords, which she did.

After more than eight hours of questioning, waiting, demands to sign a form she could not fully understand, fingerprinting and having her picture taken – she was on a flight back to Iran. She said during the entire time her requests to contact her family and university officials were denied.

“I went through one of the worst experiences of my life,” she said. “It was truly traumatic.”

After inspecting the document she refused to sign, Reihana says customs officers deemed she had “immigrant intent”, or planned to overstay her student visa and live in the US – an accusation she said is “completely false”.

“I have invested a lot of time and effort in finding the opportunity to study at my dream programme,” she said.

“Had I intended to come to the US and stay longer-term, I would have applied to many more programmes – not just a highly competitive programme that I had only a slim chance of being accepted into,” she told Al Jazeera.

In a letter addressed to the US State Department, Maureen Martin, director of Immigration Service in the Harvard International Office said that she called CBP at Logan Airport on the evening that Reihana was due to arrive to inquire about her whereabouts and avoid that she be subject to a five-year ban.

“We take seriously the routine audits conducted of our office and strive to maintain the highest standard to ensure we are complying with the law and that we are properly preparing students for the requirements of the student visa,” Martin wrote in her statement.

“Based on my review of Reihana’s application it did not appear there was any particular information that would support the notion that she intended to come to the United States for any other reason but to study,” she said.

Susan Church, an immigration lawyer who represents Reihana, as well as two other recently deported Iranian students, said customs officials seem to have been emboldened by the recent tensions between the US and Iran, but the trend is not new.

“We think there has been a significant increase in the questioning, interrogating, harassing, cancelling of visas and issuing of expedited removal orders against Iranians in the last 10 months or so,” said Church.

Church said students arrive at US airports with their valid visas and the required supporting documents after a months-long vetting process by the State Department, which involves students handing over detailed information on their backgrounds, education, work experience and family ties, in addition to their social media accounts and email addresses.

“They work their whole life towards this goal, and then a single officer takes it away,” Church told Al Jazeera. “It’s outrageous.”

CBP said they do not discuss individual cases and “the issuance of a visa … does not guarantee entry to the United States.”

“CBP has understood Iran and its proxies to be a very capable adversary for some time. Consistent with our statutory authorities, CBP leverages all available tools and information to ensure that individuals who seek entry into the United States are appropriately screened,” CBP said in an emailed statement to Al Jazeera. 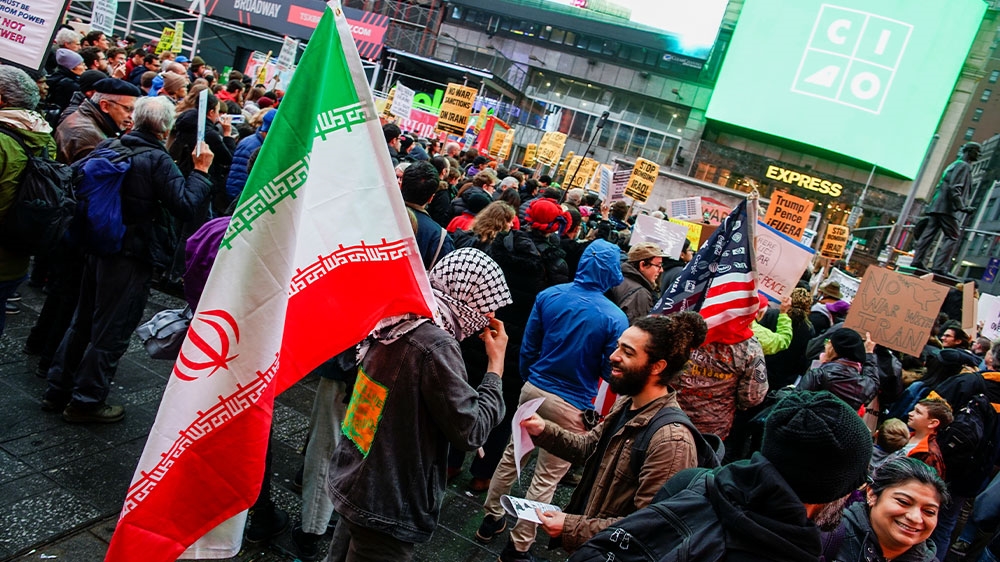 People take part in an anti-war protest amid increased tensions between the United States and Iran in Times Square in New York, US [Eduardo Munoz/Reuters]

On Monday, Democratic Senator from Massachusetts Ed Markey filed two civil rights complaints with the Department of Homeland Security, one on behalf of Reihana and a second on behalf of Mohammad Shahab Dehghani Hossein Abadi, requesting that the “legally flawed expedited removal” of the two students be investigated.

Abadi, 24, was denied entry to the US last month and flown back to Iran despite previously having studied at Northeastern University for two semesters, US media outlets reported. A Massachusetts district court judge granted him an emergency stay, but he was deported a day later.

A few days later, Alireza Yazdani, 27, an Iranian PhD student who had planned to continue his studies at Michigan State University was sent back to Iran, after hours of questioning in the Detroit, Michigan airport, his lawyers told US media.

Mohamad Elmi, 31, a PhD student who had been accepted to the University of California was refused entry and flown back to Tehran after 24 hours of questioning in a restricted area of Los Angeles International Airport, the Guardian reported.

“There has been a trend in the past several months in different airports, different states, where this has been happening, particularly to students,” Ghazal Nicole Mehrani, an immigration lawyer who has represented several of the deported students.

“They all have valid visas that have been approved after months of clearance. They have all their documentation but by the time they arrive at the border, they’re not allowed to enter the country,” Mehrani told Al Jazeera.

Mehrani said the deportations have far-reaching consequences for the students, the majority of whom are at the top of their class and are hardworking, highly educated and highly skilled young people.

“As soon as they find out that they can’t come here it impacts them academically, financially and emotionally,” Mehrani adds.

Iranian-American groups say the problem has not been limited to students. Earlier in January, more than 60 Iranians and Iranian Americans were held for hours at the US border with Canada as they were trying to return home. CBP blamed the long wait times on an increased number of travellers at the border and reduced staffing during the holiday season.

“There is a huge hike,” Ali Rahnama, a lawyer with the Public Affairs Alliance of Iranian Americans, which has been tracking the cases.

“The question is, whether there is a policy change on the CBP national level, or CBP officers are abusing the discretion given to them by the law,” Rahnama told Al Jazeera. 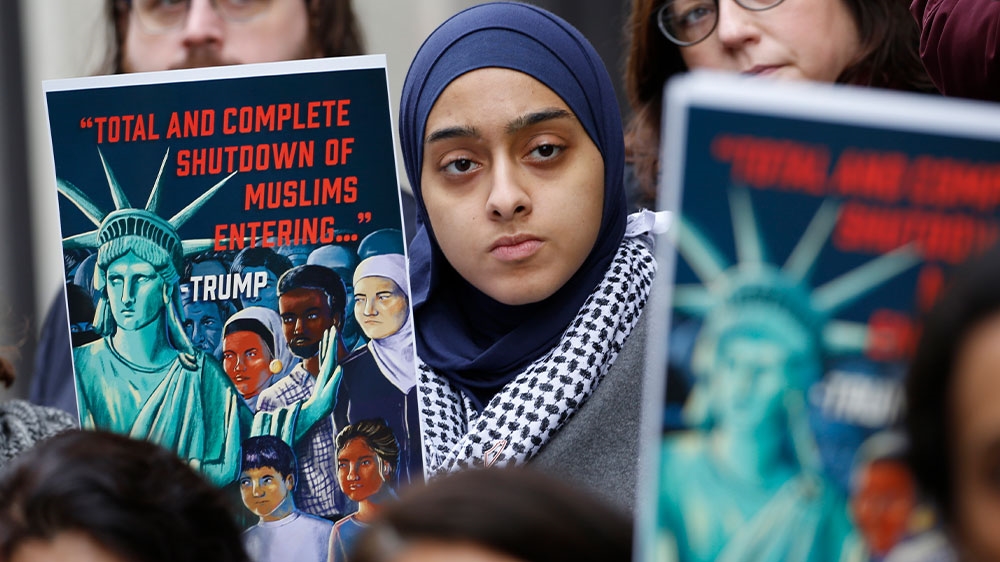 In January, a leaked internal CBP memo issued in the Seattle field office appeared to show that the agency had directed its officers to target Iranian nationals or individuals who had travelled to Iran and neighbouring countries for additional vetting measures.

In a statement on Monday, Democratic Representative Pramila Jayapal said she met with CBP Seattle Director of Field Operations and “for the first time, we were able to hear that there was indeed a breach of protocol and that a large number of Iranian Americans were inappropriately targeted.”

“I’m also deeply concerned that it took a leaked memo to get to this point. CBP headquarters has not been honest about what happened – and that must change,” Jayapal said according to the statement.

I appreciate the @CBP Seattle Field Office meeting with us today. For the first time, we were able to hear that there was indeed a breach of protocol & that a large number of Iranian Americans were inappropriately targeted. https://twitter.com/RepJayapal/status/1222934794344042497 …

126 people are talking about this

Iran is one of 13 countries included under Trump’s now-expanded travel ban which places certain restrictions on nationals from Iran, Eritrea, Kyrgyzstan, Libya, Myanmar, Nigeria, Sudan, Somalia, Syria and Tanzania and Yemen, as well as Venezuela and North Korea.

The ban exempts student visas for Iranians. In the 2018-19 academic year, 1,800 Iranian students were issued visas, according to data collected by the Institute of International Education.

Experts said the process of securing visas to the US has been fraught since the two countries cut diplomatic ties back in 1980, after Iran’s Islamic Revolution the year before.

There is no US embassy in Iran, and students wishing to apply for visas have to travel to third-country affiliates: UAE, Armenia or Turkey, at least twice to obtain their visas. Once for the interview and a second time to pick up their passports, making the process more difficult and costly than for other nationals.

“The authorities are highly sceptical of highly educated Iranians,” said Curtis Morrison, an immigration lawyer who represents many families seeking waivers under the travel ban.

“All my clients have PhDs and that’s not a coincidence,” Morrison told Al Jazeera.

In 2018, the Trump administration withdrew from the Iran nuclear deal signed between Tehran and six world powers, under which Iran agreed to curb its nuclear programme in return for the lifting of international sanctions.

After backing away from the agreement, Washington reimposed sanctions on Iran as part of a “maximum pressure” policy.

Fatemeh Shams, assistant professor of Persian Literature at the University of Pennsylvania said that the restrictions Iranian students face should not be viewed in light of the recent tensions alone.

“After the hostage crisis in the 1980s, after the Iranian revolution, and after 9/11 there were many cases of people who were refused visas or when they arrived at the border, were denied entry,” Shams told Al Jazeera.

“This is not the first time that Iranians are being questioned or deported at the borders,” Shams added.

Church, Reihana’s lawyer, said “expedited removal” based on “immigrant intent” is a severe measure, one that is usually reserved for travellers who demonstrate clear incentives to settle in the US – which is not the case with the Iranian students, most of whom have no relatives in the US.

Church said there are only two legal grounds for expedited removal: fraud and immigrant intent. Political views or social media posts, which have come under increased scrutiny in recent months, is not grounds for inadmissibility.

“The government doesn’t have a ground to rescind their visas so they are using a generic and inappropriate ground of immigrant intent,” Church explains.

Reihana said most of the questions she was asked during her eight-hour ordeal were focused on her political views and affiliations, an area that is outside of her interests and expertise: philosophy.