The rise of Halal tourism 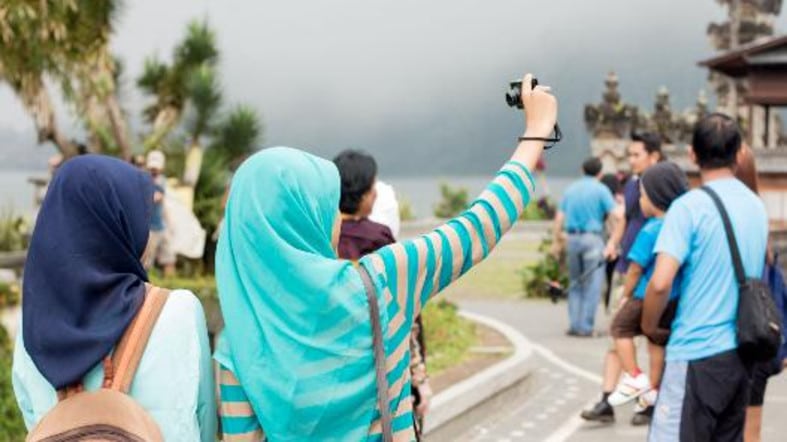 Muslims now make up one of the fastest growing segments of the global travel industry. In response, hotels and tour operators are increasingly trying to meet their dietary and religious needs.

For one of the fastest growing sectors of the global travel industry, there is no pork on the hotel dinner menus. There are flights with no alcohol on the drink carts, resorts with separate swimming pools for men and women, and daily itineraries with built-in break times for the five daily calls to Muslim prayer.

Since 2016, the number of Muslim travellers has grown nearly 30 per cent, and a recent joint study by Mastercard and Crescent Rating, a research group that tracks halal-friendly travels, projects that over the next decade, the sector’s contribution to the global economy will jump to $300bn from $180bn.

With a population that is disproportionately young, educated and upwardly mobile, they are one of the fastest growing demographics on the global tourism scene.

However, this wasn’t always the case. In 2015, Soumaya Hamdi went road tripping through Asia with her husband and her then four-month-old baby. The trio visited Singapore and Malaysia, and then caught a flight to South Korea and on to Japan. The trip was thrilling, but Ms. Hamdi and her husband, who are both observant Muslims, found the daily search for halal-certified food a difficult one.

Ms. Hamdi, who is based in London, began blogging about the best Muslim-friendly restaurants she found, as well as prayer facilities and sites that were particularly welcoming for a family with a young baby. Those musings turned into Halal Travel Guide, an online platform offering tips, recommendations and curated itineraries for Muslim travellers.

Her timing was right.

“In Europe, the Muslim community is now in its third or fourth generation. They are educated and have good paying jobs,” said Ufuk Secgin, Chief Marketing Officer of Halal Booking, a Muslim-focused vacation search engine.

“For the first generation, their idea of a holiday was visiting the family in the home country. This has changed,” he said.

At ITB Asia in October, 2018, a leading travel show held in Singapore, organisers partnered with two halal travel authorities: Crescent Rating and Halal Trip, to offer specialised panel discussions and showcases targeting the estimated 156 million Muslims who would book travel between now and 2020.

At the heart of much of the discussions was matters of the belly. For Muslim travellers, “The number one factor is good quality halal food,” Ms. Hamdi said in an email exchange.

“I’m not talking about curry or biryani — I’m talking about authentic local food that is halal. After that, it’s usually prayer facilities,” she added.

Tourists’ global demand for halal food has grown so much, in fact, that Have Halal Will Travel, a Singapore-based online community for Muslim travellers, has also partnered with ITB Asia with a three-hour conference and special booth space focusing on foodie-centric outreach to the Muslim tourism sector.

Like Halal Travel Guide, Have Halal Will Travel was founded in 2015. Today, their content reaches 9.1 million users each month, according to their founder, Mikhael Goh.

Mr. Goh dreamed up the site with three friends while studying abroad in Seoul, South Korea, he found himself frustrated on a daily basis with lack of information about where to find quality halal food.

“We were thinking, why is it in 2015, when there is Yelp and TripAdvisor and so many popular apps and services to tell you where to eat and where to travel, why on earth is there so little information for Muslims?” Mr. Goh asked in a phone interview.

“Not just about food — yes, halal food is the basis of a lot of things, but also about safety and prayer. There was a general lack of information out there and the information that did exist was so fragmented,” he added.

Only a handful of years later, that gap in the market is now teeming with niche sites, many of them written specifically for young Muslim women.

At Passport and Plates, the Los Angeles-based blogger, Sally Elbassir, chronicled her global foodie adventures where pork and alcohol are always off the menu. At Arabian Wanderess, Esra Alhamal writes about travelling as a female Muslim, and at the popular Muslim Travel Girl run by the Bulgaria-born, Britain-based Elena Nikolova, readers can learn about Muslim-friendly honeymoon resorts with private pools and get tips for a D.I.Y. Umrah (Islamic pilgrimage to Mecca).

Many of the bloggers interviewed for this article echoed the same sentiment: their goal is not just to make it easier for Muslim travellers to find food, prayer space and alcohol-free activities that appeal to them. It is also to support those travellers to branch out of their comfort zones and feel empowered exploring the world.

“We specialise in pushing people to non-Muslim majority companies,” said Mr. Goh, adding that, “The most popular destinations we work on are Japan and Korea. Our audience is young — 25 to 30 years old — and very influenced by K-pop and Instagram, so we write a lot about how welcoming those places are.”.

Ms. Hamdi of Halal Travel Guide agreed thus, “We encourage Muslims to seek culturally immersive travel experiences outside of the traditional Muslim-friendly destinations such as Dubai and Morocco. Muslims are looking for added value to their trips — from private beaches where women can bathe without men to disturb them, and more than this, trips that offer the Muslim traveller the chance to experience something completely different.”